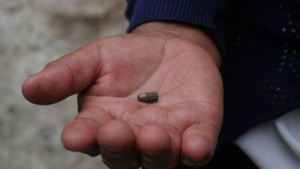 Photo by Marissa Revilla: bullet from one of the attacks

Photo by Marissa Revilla: bullet from one of the attacks

KAIROS is gravely concerned about the escalation of violence against Indigenous communities in the municipalities of Aldama, Chenalhó, and Chalchihuitán in Chiapas, Mexico.

Members of the human rights program of the Diocese of San Cristobal de las Casas, a KAIROS partner, inform us of a series of recent attacks against Indigenous communities and their supporters over land defense struggles in the region. KAIROS condemns this use of violence meant to intimidate and deter Indigenous communities from asserting their right to self determination.

KAIROS endorses the demands of our partner, the Diocese of San Cristobal de las Casas, and others working directly with Indigenous communities in the region, which are directed at the Government of Mexico:

Read the rest of the letter, in Spanish.

KAIROS, as a part of the Americas Policy Group, also submitted a letter in Spanish to the President of Mexico denouncing the attacks. Read the letter.