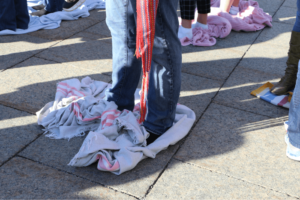 Since its creation in 1997, the KAIROS Blanket Exercise (KBE) has been delivered thousands of times to tens of thousands of people of all ages and from all backgrounds by a wide variety of Indigenous and non-Indigenous facilitators. It is a unique and impactful way to begin, or continue, the conversation about decolonization and reconciliation.

Created by the Aboriginal Rights Coalition (ARC), which later became part of KAIROS, the KBE was initially meant to introduce Canadians to the major themes and findings of the Royal Commission on Aboriginal Peoples (RCAP).  As some will remember,  RCAP was commissioned by the Government of Canada in response to an historic event in the summer of 1990 known to some as the Occupation of Kanehsatà:ke & Kahnawà:ke, and to others as the Oka Crisis.

ARC brought together Indigenous Elders, educators, and allies who wanted to ensure that RCAP and its recommendations were not shelved and forgotten. The KBE is built on the foundation of these long standing, collaborative  relationships between Indigenous and non-Indigenous peoples dedicated to raising awareness of continuing injustices and the impacts of colonization, and to promoting further learning. For over two decades, ARC and now KAIROS have guided the KBEs ongoing development with the leadership of Elders, Knowledge Keepers, and Indigenous facilitators across this land.

The KBE uses participatory popular education methodology to explore the historic and contemporary relationship between Indigenous and non-Indigenous peoples in the land we now know as Canada. It is this interactive and participatory approach that makes the KBE such an effective and distinctive way to tell the difficult history of the relationship between Indigenous and non-Indigenous people in Canada – a history that until recently has largely been hidden from Canadians.

It is reassuring and inspiring to be part of the KBE experience. We are witnessing a gradual and perhaps slow but nevertheless positive change. Five years ago, we could not imagine the KBE being part of the curriculum in educational institutions. And yet now the KBE is an integral part of the learning program in many schools and universities across Canada.

Most people describe the KBE as an experiential teaching tool. However, it is also an effective learning, relationship and community building exercise. After participating in the KBE, it is common to hear people say things like : “It changed my life” or “After going through the exercise the first time I knew I wanted to become a facilitator” or “It brought me closer to my culture as I learned things I didn’t know” or “It helped me understand where I come from.”

This 90-120 minute participatory workshop builds understanding of how colonization of the land we now know as Canada has impacted the people who lived here long before settlers arrived. Through this exercise participants explore the nation-to-nation relationship between Indigenous and non-Indigenous peoples in Canada, how this relationship has been damaged over the years, and how we can work collaboratively toward reconciliation.

Through the years, the KBE has evolved from a humble – one page, one blanket – workshop, into a multi-page, multi-blankets national and international movement for reconciliation. The KBE is not only delivered in Canada. KAIROS has KBE partners in Guatemala, Ecuador, Australia, the Philippines, and the United States who have adapted the exercise based on the model developed in Canada. All these partners first experienced the KBE in Canada and immediately identified their desire to partner with KAIROS to bring the KBE experience to their regions. Recently KAIROS was contacted by a student in the Indigenous Studies Program at a university in Norway who is including the KBE as part of her thesis for a master’s degree. When asked about why she decided to include the KBE in her thesis she said, “it is because of the KBE unique and effective methodology”. She is discussing how the KBE is used as a settler education tool within a wider discourse on Critical/Popular Education pedagogy.

It is worth noting that it does not take long for people from other countries to connect the dots and realize the similarities between colonization in Canada and other regions. This also helps build relationships and solidarity between Indigenous peoples from different parts of the world. Another fascinating connection is the Indigenous worldview of how we all are related to and connected to mother earth and to all creation. As a good teacher named gkisedtanamoogk says “We are related to everything above us and below us”.

Had it not been because the COVID19 Pandemic there was a possibility that a “World KBE Version” would have been featured in the World Indigenous Peoples Conference in Education scheduled for November 2020. KAIROS was working with partners in Australia in the coordination of developing the World KBE version when the pandemic arrived and all plans had to be postponed. But this certainly is something we are excited about and look forward to continue working on once the pandemic is under control.

Experiencing the KBE can  bring up some strong emotions and reactions. This is why KAIROS has developed a KBE Facilitator Training program that is trauma-informed and focuses on participant and facilitator support and safety. Everyone interested in facilitating the KBE is required to complete the facilitator training program. KBEs are always led by Indigenous people, and it is a best practice to involve Indigenous Elders or Knowledge Keepers. The KBE experience is both difficult and rewarding. Only through uncovering our hidden history will we be able to move towards building healthier and more sustainable communities where true and meaningful justice is enjoyed by everyone.

The KAIROS Blanket Exercise, as small and imperfect a grain of sand as it may be, is an important component in the sea of work and efforts to build a better world. If you, or anyone you know is interested in experiencing and / or facilitating the KBE please email: blanketexercise@kairoscanada.org

You can also visit the KBE website for more information and to view a short video about the exercise: www.kairosblanketexercise.org