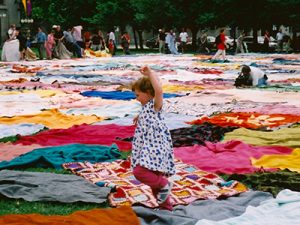 “Count off seven sabbath years—seven times seven years—so that the seven sabbath years amount to a period of forty-nine years. Then have the trumpet sounded everywhere on the tenth day of the seventh month; on the Day of Atonement sound the trumpet throughout your land. Consecrate the fiftieth year and proclaim liberty throughout the land to all its inhabitants. It shall be a jubilee for you; each of you is to return to your family property and to your own clan.” (Leviticus 25: 8-10)

I am writing this reflection on the 2nd anniversary of the death of my dear friend and colleague John Mihevc. A persistent and hopeful ecumenical justice advocate, John loved family and music, and lived his life in a community of faith and friendship. It is impossible for me to think about him without thinking about 1998-2001, the period of the Canadian Ecumenical Jubilee Initiative (CEJI). This was a Canadian project of theological reflection, education, and advocacy focused on faithfully renewing social and ecological justice at the turn of the millennium. While it was linked to the global Jubilee 2000 debt cancellation campaign, in Canada we proudly had our own flavour, depth, and scope. As John and I served this engaging and hopeful project, our friendship deepened.

Today, we don’t talk as often about Jubilee, but it remains a resilient concept that springs from shared, ancient faith. During CEJI, when trumpet voluntaries and broken chains abounded, we summed up the Jubilee instructions as release from bondage, redistribution of wealth, and renewal of the earth. But just as important is that overall sense of a societal “reset.” The biblical injunctions surrounding Jubilee stemmed from realism about how the world seems to work. What God loved into being, celebrated as good, we often let slip away, let sink into inequities and injustices. We let alienation and disconnection persist and spiral into violence. Rather than let that brokenness be, that injustice harden, Jubilee logic says there is a need, a responsibility, to intentionally and systematically try to set things right, or set them as right as possible.

It has not been 50, but over 500 years of violence of colonization that we now seek to address through decolonization and reconciliation. In KAIROS we call it “resetting the relationship”—between Indigenous and non-Indigenous peoples. Within Canadian society it’s about resetting and renewing relations, but also about closing the devastating equity gap created by colonization.

In Palestine, 2017 is the 50th year of the Israeli occupation of Gaza and the West Bank, an occupation that causes daily hardship, exacerbates violence, and has also created huge inequities between people who literally live side by side. The Palestinian community–and many Israeli allies–yearn for an end to the occupation and for a systematic, societal reset towards a just and sustainable peace. They “co-resist,” refusing to accept injustice as permanent. Tony Deik of Bethlehem Bible College describes the meaning of Jubilee in his context this way: “To begin with, we end the occupation. Secondly, we begin to learn how to live with one another together, to accept one another as equals. I know that this [Jubilee] is a calling from God to us, to make that happen.”

In both situations, as it was in the biblical notion of Jubilee, land is at the heart of the question. It’s a question that can’t be ignored.

My sense is that each New Year can represent a mini-Jubilee in our own lives, tapping into that sense of a periodic, intentional reset.

The turn of the year can be a small Jubilee for us as we dream, pray, and act for that grand global reset that is the necessity of justice—that transformation which should be our global New Year’s resolution.

One of John’s roles was to edit the three main Jubilee theology books published as part of CEJI. And I close with his words in the introduction of Sacred Earth, Sacred Community: “We are challenged…to make Jubilee into permanent practice. That is our call to Tikkun: to heal, repair and transform the world.”

Jennifer Henry has served as Executive Director of KAIROS: Canadian Ecumenical Justice Initiatives since 2012. She has worked in ecumenical social justice for over 20 years, beginning in 1993 when she joined the Ecumenical Coalition for Economic Justice (ECEJ) as a popular education coordinator.