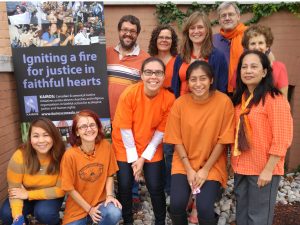 The Orange Shirt Day movement began in Williams Lake, BC, in Spring 2013, but its legacy dates back to 1973 when 6 year-old Phyllis Webstad had her new orange shirt stripped off her back as soon as she arrived at St. Joseph’s Residential School.

Today, the orange shirt commemorates the experiences of Residential School Survivors, honouring their stories and reaffirming that they, and all those affected by residential schools, matter. On September 30, in the spirit of healing and reconciliation, KAIROS calls on all Canadians to join us in wearing an orange shirt. Join us as we listen with open hearts to the stories of survivors and their families and remember those who did not return home.

KAIROS is honoured that Indigenous Rights Program Coordinator, Verlin James, has shared his family’s residential school experience. And we invite you to share it with your family and friends.

When my grandfather went on his journey to the western door seven years ago, my mother cried unlike any other time that I’ve seen save following the tragic death of my uncle three years after. He too died as the memory of their childhood was given life amidst the wailing of the most Spartan of women in mere moments as an eclipse turns daylight to darkness.

In both instances I was there as emotion curdled the heart of the mother who bore me, and raised me in the manner of my people. She spoke softly of checking rabbit snares as a little girl while her younger brother ran amok on snowshoes, having just learned to walk. The snowdrifts in that winter passed swiftly from the hearth and home of her family along the trapline where her mother and father taught her to read and to write, to the barren, soulless walls of the Anglican school two seasons after.

They were separated from each other, my mother being the eldest though still a child and her brother three years of age. The gulf which divided them was as the river which separates the living from those dancing in the heavens above. (The aurora borealis, called wawatay in Northern Ojibwa, are where the dead are believed to go after life).

In the moment in which my mother was the most human, she spoke of how her brother, my uncle, cried and how he could not understand why his older sister could not comfort him…years later, he died hard as did his son, my cousin and these are the legacies turned inward as coils, twisting, turning…until there is no space to go, but out.

Orange Shirt Day is the legacy of Phyllis Webstad and the orange shirt that she wore on her first day of school at the St. Joseph’s Residential School. Like my mother, the colour orange is significant in that it represents a loss of innocence and wonder. In my mother’s case it was the colour of her pet cat, one which my grandfather had bestowed to her as a little girl. He left the home after she and her siblings were taken to the Pelican Lake Residential School and never returned.