International Women’s Day— one woman at a time 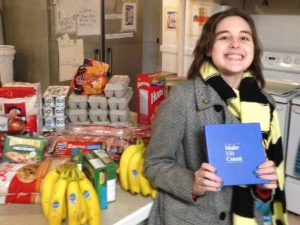 March 8 is International Women’s Day. Although recognized by the United Nations in 1977, it has been celebrated by various countries since at least 1909, when the Socialist Party of America acknowledged the one year anniversary of the International Ladies Garment Workers Union strike in New York. At the time, political discourse and revolutionary movements were at an all-time high. People were beginning to think and act globally and certain values were being understood as universal, not simply local or cultural.

So many advances have been made because of women’s contributions over the centuries. I think about the steady buildup of human rights within private industry, public service, domestic life, church… and I also think about the threat to these carefully crafted rights.  Most concerning for Turtle Island residents is both language and policy emerging as a result of the election of Donald Trump and his appointment of a cabinet that consists of members of the ultra-wealthy class, and his own family.  The barrage of messages threatening most of the values we hold dear has been relentless. Direct challenges to these messages appear in social and professional media. But what do we do for our hearts and souls at this moment in history?

People from all walks of life can serve to inspire others. For me, the International Woman that I want to lift up is Becca Schofield. Becca is the daughter of one of my closest high school friends, Darren. She is a 17 year old normal kid, interested in the kinds of things most kids her age are – music, sports, Harry Potter.  But two years ago, Becca was diagnosed with brain cancer.  She dug in and began treatments to fight it. With the support of her family and community, she started a Facebook group, “Becca’s Battle with Butterscotch”, a less intimidating name for cancer. The page was filled with optimism and hope. And then in mid-December 2016, she received news that no one expected: new inoperable tumours were discovered in her brain. Becca was told she had 6 months to a year to live. This news hit like a hammer. Many of us were devastated, and had no words of comfort. This is where Becca’s story takes off.

She created a bucket list of experiences she wanted to have in her remaining time. People began to clamour around, offering money and support to meet the items in this bucket list. Feeling overwhelmed, Becca asked everyone who wanted to be of assistance to turn this generosity to others. She wanted to see and hear stories of kindness. She created a hashtag, #BeccaToldMeTo, a motivator for people to randomly offer kindness to others no matter the situation. The response grew quickly. It began with people paying for the coffee of others in line. People began to visit seniors’ homes, to go looking for homeless people to offer shelter and food. Others spoke of being inspired to donate household items to charities. Young girls posted about donating their hair to cancer charities. The movement began to spread globally, as social media spread her message across the planet. She began to be interviewed by newspapers, TV stations, magazines. Last month, she received a certificate of recognition from the Prime Minister’s office, for bravery, volunteerism and inspiring commitment to community.  And the Ellen DeGeneres show has contacted the family, with interest in her story.

My Facebook newsfeed had been dominated by American politics like no other time. It was crushing my spirit. And then, almost overnight, it began to fill with hundreds of stories of people being generous in both simple and complex ways. And I found my heart swelling with hope and amazement. The stories that rarely make the news, stories of love, selflessness, personal conversion were replacing the ones that were crying doom. People were now writing from everywhere in the world, all moved to action because of the courage of this young woman.

Becca’s story reminds me of Pakistani activist Malala Yousafzai, another young girl who was thrust into tragedy and then turned that tragedy around in order to educate others. The gospel is filled with stories of young vulnerable persons who are called by the Divine to perform daunting tasks. These stories have many similar responses – fear and disbelief, and then a willingness to do as G-d asks, despite the costs. The political implications are sometimes obvious in these stories, “Moses, I want you to set my people free!” and sometimes not, “Mary, you are going to have a baby out of wedlock, and I want you to name him Jesus.” What is it that motivates us to listen to one story over another? What is it that brings us to action and risk when we don’t always know the results of these choices? I don’t always know, and I normally don’t question my motivation. I simply know the truth of a famous quote by American author and professor, John Augustus Shedd: “A ship in harbor is safe, but that is not what ships are made for.”

Becca Schofield is inspiring people to give of themselves to strangers, to loved ones, to all in need. It’s not an original idea. But it is an effective one, one that creates a legacy that will ensure her name is remembered for a very long time. For me, this year’s International Women’s Day is Becca Schofield Day.

Rick Garland works as the administrative associate for Kairos. He worked previously as the general secretary of the Student Christian Movement of Canada, and as the national youth and young adult program coordinator for The United Church of Canada.