I am a Witness 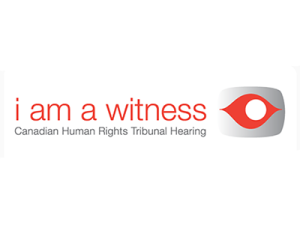 In October 2014, KAIROS hosted a Solidarity Evening for the Caring Society on the eve of final arguments before the Canadian Human Rights Tribunal. Leaders and representatives from all of KAIROS’ member churches attended this event, which included presentations from filmmaker Alanis Obomsawin, representatives from the Federation of Saskatchewan Indian Nations and the Assembly of First Nations, the Caring Society’s Executive Director, Cindy Blackstock, and the Chair of the Truth and Reconciliation Commission, Justice Murray Sinclair, among others.

KAIROS has produced 22 inspiring and compelling vignettes featuring some of these speakers. One vignette will be released each week to build awareness and momentum towards the tribunal’s decision, which was expected in mid-April but now may not come until the fall, as well as for follow-up education and advocacy initiatives. The first vignette was released on Friday, February 27, the anniversary of when the case was first filed. All of the vignettes will be available on KAIROS’ YouTube Channel and on the First Nations Child and Family Caring Society‘s website once they are released.

The fifth vignette, released this week, features Bishop Susan Johnson (Evangelical Lutheran Church in Canada), The Rev. James Scott (The United Church of Canada), and Cindy Blackstock (First Nations Child and Family Caring Society). To watch videos from previous weeks, check out the I am a Witness video stream on our YouTube Channel.

For more information about this case, visit the First Nations Child and Family Caring Society’s “I am a Witness” campaign page. This campaign invites organizations and people of all ages to follow and learn about the case in person or online and to decide for themselves if First Nations children are being treated fairly. The site features a comprehensive timeline with the legal submissions by all parties in the case along with relevant reports from independent sources like the Auditor General of Canada.