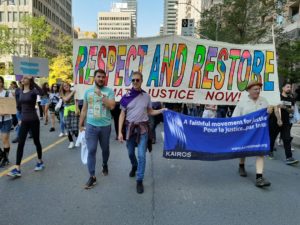 As part of the Global Climate Strike on Friday, September 27, millions of people hit the streets around the world and across Canada to demand radical responses to the climate emergency.

The strikes were wildly successful and brought together an intergenerational crowd full of both new and familiar faces.

To help coordinate and plan the strike, KAIROS joined the S27 Coalition, a group of civil society organizations in Toronto. Our collective demands were:

The S27 Coalition’s demands braid together all aspects of KAIROS’ work and we were proud to be part of a group that looked at the climate emergency from multiple angles while ensuring that everyone had a voice in the planning. Of importance for KAIROS is the centring of Indigenous rights and sovereignty because Indigenous peoples have been at the forefront of the environmental movement for decades and are disproportionately harmed by the changing climate.

This centring of sovereignty extends internationally. For example, KAIROS’ partner, the National Council of Churches in the Philippines, emphasizes the need to promote locally centred projects for climate adaptation and mitigation that are not imposed top-down on already vulnerable communities. Beyond supporting local capacity, Canada also has an important role to play in the creation of international agreements, which need to protect land and water defenders.

“There is a need for international, unambiguous, and binding agreements formulated with a rights-based, gender-sensitive, and culturally-inclusive framework. These agreements should also reject market-oriented, profit-driven false solutions for carbon reduction and climate adaptation.” Mervin Toquero, National Council of Churches in the Philippines

Intersectional demands made the Global Climate Strike successful because nobody was left out of the conversation. Ecological justice goes beyond fighting for environmental rights because climate change impacts all aspects of humanity in different ways. Climate cannot be spoken about in isolation from issues such as poverty, health, racism, and migration. For a true response to the climate emergency, a whole new world system must be created.

Large-scale collective activism is crucial because it shows policy makers and governmental bodies that people are paying attention. Political shifts cannot happen without political will; politicians won’t act unless their constituents tell them that certain issues are a priority. With more than seven million people taking to the streets, politicians around the world will have to act on the climate emergency.

The Global Climate Strike was the last big event in the Week for Future, and it wraps up KAIROS’ Climate Action Month. During the month of September, KAIROS has attempted to bring awareness to the climate emergency. We have stockpiled tools and resources to help have the difficult conversations that need to happen around climate change. This is especially important because Canada is facing a federal election in three weeks. To learn more about the federal election please visit: https://www.kairoscanada.org/resources/federal-election-2019

The Global Climate Strike has shown us that people across Canada are energized and ready to challenge the status quo. On October 21, continue the momentum and make your voice heard through the ballot box!