For truth and accountability: Justice for the death of First Nation children in Canada 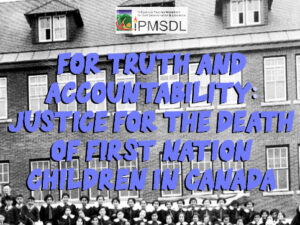 The International Indigenous Peoples Movement for Self-determination (IPMSDL), KAIROS partner in the Philippines, joins the utmost condemnation of the evidence of genocide towards Indigenous Peoples and First Nations of Canada with the recent discovery of the remains of 215 Indigenous children, students of Kamloops Indian Residential School in British Columbia.

From about 1863 to 1998, the Canadian government forcibly placed more than 150,000 indigenous children in these schools as part of Canada’s assimilation through the residential school system. The 2015 report by the National Center for Truth and Reconciliation estimated that more than 150,000 children attended these schools. More than 6,000 died, some ran away, and others died at the schools and never returned home.

These schools instituted a brutal “cultural genocide” against the First Nations of Canada. It prevented the children from using their language and practicing their culture. They received severe and harsh punishment for doing so. They suffered from physical, emotional, and sexual abuse, rape, and malnutrition. Stolen and violently separated from their parents, the children, family, and clan suffered emotional trauma. They deserve justice.

Although the Canadian government formally apologized for the system in 2018, it acted only on a few of the recommendations of the reconciliation commission. It has done little or nothing in ensuring the health, well-being, and education of indigenous children.

The IPMSDL stands with the First Nations in calling for an investigation and identification of these deaths. With the discovery of the Kamloops mass grave, the government of Canada should conduct a nationwide search for such mass graves in all residential schools. We join the call for the return of the bodies of these stolen children to their home villages for proper burial and recognition. This horrifying discovery exposes the historical injustice, years of systemic discrimination, and genocide Indigenous Peoples suffered under colonial rule and policies.

The genocide persists today. The non-recognition of indigenous land rights, plunder, and exploitation of resources leads to further dispossession and dislocation of First Nations and loss of their cultural identity. The cases of First Nation girls and women missing and found murdered remain unresolved. The aspiration for genuine reconciliation will remain elusive without justice and accountability.

Indigenous communities in many countries undertook steps in building indigenous schools centered on enriching and preserving their culture and identity in Indigenous communities of Lumad in the Philippines, Sengwer cultural centers, and Indigenous-led schools for Native Americans. Let us support this vital assertion of the indigenous right to self-determination and ways of life.

In solidarity, we call for justice, truth, and accountability. Reclaim our identity that colonization and continuing marginalization have decimated.