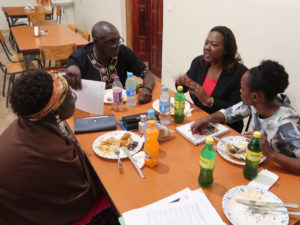 Concerned about a lack of global interest in the welfare of South Sudan, which for years has been mired in a brutal civil war, the Ecumenical Network South Sudan (ENSS)’s annual gathering focused on enhancing international advocacy and the role of the South Sudan Council of Churches (SSCC) in peacebuilding processes.

SSCC’s National Women’s Program is part of KAIROS’ Women of Courage: Women, Peace and Security program. This year’s gathering took place at the Good Shepard Peace Centre in Kit, near Juba, the nation’s capital, on January 21-22. I was there, along with other ecumenical partners from Africa, Europe and North America.

There was a palpable sense at this ENSS that with all the peacebuilding delays between the parties to the civil conflict, the world’s attention was likely to shift elsewhere as the patience and hope of the international community wanes. However, on February 22, shortly after the conclusion of the ENSS and my return to Canada, the Revitalized Transitional Government of National Unity was formed with a major opposition group.  We pray that this hopeful development will last.

Despite the inconsistent results of the formal peacebuilding process, an example of the fruit of persistent, patient ecumenical advocacy is emerging around conflict oil, which was highlighted during the gathering. South Sudan has the third largest oil reserves in Africa after Nigeria and Angola. Even beyond issues of climate change, oil may be more of a curse than a blessing when it is a driver of conflict and human rights violations.

One example of this is the potentially precedent setting court case against Swedish oil company, Lundin Petroleum for war crimes and crimes against humanity in the late 1990s and early 2000s. This case has an important Canadian connection and highlights the critical role of ecumenical advocacy in Canada.

A report on this case was presented by Egbert Wesselink, a Senior Advisor with PAX Netherlands. He noted that by the end of this year, the Swedish Prosecution Authority is expected to indict the CEO and the Chairman of Lundin Petroleum in court on charges of aiding and abetting war crimes and crimes against humanity in Unity State in what is now South Sudan between 1997-2003. Court proceedings are expected to take two years followed by several more before a final judgment is rendered. The case will likely create important legal precedents with global significance, setting new international standards for business conduct.

The Swedish criminal investigation has grown out of seeds that were planted by the churches in South Sudan and through pre-independence SSCC predecessors who called on their international ecumenical partners to work towards suspension of the oil exploitation until peace agreements were signed.

In response to this call, the churches in Canada and KAIROS through one of its founding ecumenical coalitions, Inter-Church Coalition on Africa  (ICCAF) campaigned for Canadian oil company Talisman to cease operations that were leading to the displacement and egregious human rights violations by security forces – including Sudanese government, militia and para-military – of affected communities in an adjacent oil concession block near Bentiu and the border with Sudan.

Advocacy efforts at the time culminated in a Canadian Government Mission to Sudan in January 2000 and the eventual withdrawal of Talisman from Sudan. Such advocacy efforts resulted in the European partners establishing the European Coalition on Oil in Sudan (ECOS) between 2001-2013 to conduct research, advocate and report annually on oil issues. It is based on the Talisman security reports that the prosecution is claiming that Lundin Oil knew or should have known of the human rights abuses.

The Comprehensive Peace Agreement, an accord signed 2005 by the Sudan Peoples Liberation Movement and the Government of Sudan to end the Second Sudanese Civil War, established a right to remedy of victims of oil operations. This was supported by the churches in South Sudan who advised ECOS to work towards its realization. ECOS finalized the report on Unpaid Debt in 2010 that called upon Lundin, PETRONAS (the Malaysian national oil company) and OMV (Austrian) – together forming the Lundin Consortium — to contribute to remedy of the victims and examine the companies’ role in the civil war.

While the Lundin legal defense team is sure to challenge the process, the trial slated for the fall in Stockholm offers unique opportunities for reconciliation and peacebuilding, as well as providing various remedies for the victims such as truth telling and recognition, reparation, and compensation of victim communities. The churches in South Sudan and internationally are positioned to be proactive in confirming their historical role and position, as well as their prophetic, cautionary voice on the fraught nature of fossil fuel extraction in South Sudan’s national development.

The ENSS gathering made clear the critical importance of the neutrality and unity of the churches in South Sudan as a living example of peace for the people of South Sudan. At the same time, the churches  and their many stakeholders including ENSS European and North American hubs can be encouraged by the emergent justice for those affected in the past by conflict oil in what is now South Sudan as an example of the value of persistent and patient advocacy.