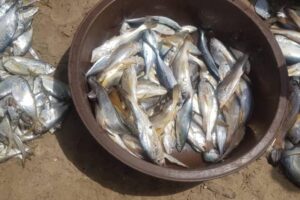 Given the onset of nearly irreversible climate change, the irony is that many areas of the Global South where people have contributed substantially less to greenhouse gas emissions are comparatively more impacted. This inequality is linked to environmental racism and the existence of sacrifice zones. Environmental racism is the system that discriminates against communities where most residents are Black, Indigenous, and people of colour by harming the air, land, water, and biodiversity. A sacrifice zone is a geographic area inhabited by people of colour that has been permanently impaired by environmental damage.

One such place experiencing these phenomena is the Niger Delta in Nigeria where residents benefit proportionately less from the global neoliberal economy while suffering disproportionately from the ecological damages from oil extraction. The most concentrated freshwater wetlands and aquatic ecosystem in West Africa is found in the Niger Delta, which supports the life and livelihoods of many local communities and the West African economy. This significant ecosystem is put at serious risk by the impacts of large-scale oil extraction. Substantial wetland degradation from the loss of forests has been confirmed by satellite data for decades. [i]

As an OPEC (Organization of Petroleum Exporting Countries) member, Nigeria is Africa’s largest oil producer and exporter, and is heavily dependent on oil revenues that account for some 95 percent of export earning and 40 percent of government revenue. The consequences of oil production for the biodiversity of the Niger Delta from leakages of crude oil (approximately 300 annually), chemicals in production processes, and gas flaring are enormous. This has decimated people’s fishing livelihoods and clean water sources. Some blame a lack of laws, weak government regulation and lax enforcement, as well as vandalism of pipelines that feeds into an underground market that often leads to oil spills.

In the Niger Delta and other places in the Global South, multinational oil corporations such as Shell are far less likely to consent to, let alone ask for, mitigation of environmental and social impacts. Moreover, the actions of such multinationals have helped create conditions for environmental destruction, human rights abuses, and aggravated unrest in local populations. [ii]

As illustrative of what happens in the Niger Delta, there was an oil spill in Ikarama in Bayelsa State, near the Nun River, a tributary of the Niger River north, northeast of Yenagoa, the state capital, along the Trans-Niger Pipeline (also known as Shell’s Okordia-Rumuekpe Trunk Line owned by Shell Petroleum Development Company) in November 2019. The spill was formally described as neither a Shell equipment failure nor sabotage during an initial investigation, even though it appeared to have been equipment failure. The community of Ikarama has experienced many oil spills that the government and Shell usually refer to as “third party interference”, which typically refers to crude oil theft and sabotage of facilities, even if not always true, though there has been belated and increasing mention of equipment failure.

Environmental Rights Action/Friends of the Earth Nigeria (ERA/FoEN), which typically follows up on such incidences pointed this out in December 2019 based on Shell’s erroneous Joint Investigation Visit report. A July 2020 supplemental inquiry established that the oil leak was indeed caused by equipment failure. The spill caused substantive damage to swamps, lakes, and farmlands around the Ikarama community. ERA/FoEN demanded in its initial report that “the National Oil Spill Detection and Response Agency should rise up to the occasion and ensure proper identification of cause of spill as Shell cannot regulate itself in Nigeria” and that “action should be taken to ensure investigation of the ruptured spot; even if it meant bringing out the pipe or cutting that section for proper examination.” [iii]

In February 2020, community fishers and others along the Atlantic coastline of the Niger Delta witnessed the unusual phenomenon of a massive amount of dead fish floating, washing ashore, and littering the beaches. This forebodes a very troubling pattern of destruction of the marine and freshwater systems and attendant lost of health and livelihoods for more than just the immediately affected communities. Though the cause is unknown, affected communities suspect oil industry pollution, given the experience of fisher folks in the Delta. Health of Mother Earth Foundation (HOMEF), which hosts Oilwatch Africa’s Nigerian affiliate, has called on relevant Nigerian public agencies to speed up transparent and all-inclusive investigations to discover the cause of this enormous loss in the Niger Delta. Beyond even ecological and livelihood losses, whatever killed the fish is likely to work itself into the larger food chain. The causes must be identified to prevent reoccurrence, [iv] network of fishers with roots in Africa with which HOMEF has common cause, has demanded immediate action. [v]

The sacrifice zone that is the Niger Delta must be instructive as we imagine and create a just recovery and transition to a sustainable, Indigenous people-led society that conserves and re-establishes the primacy of humans living in harmony with nature over endless economic growth.

[i] Ayansina Ayanlade and Ulrike Proske, (2015). Assessing wetland degradation and loss of ecosystem services in the Niger Delta, Nigeria, in: Marine and Freshwater Research, CSIRO Publishing, http://dx.doi.org/10.1071/MF15066
[ii] Maiangwa, Benjamin / Agbiboa, Daniel E. (2013), Oil Multinational Corporations, Environmental Irresponsibility and Turbulent Peace in the Niger Delta, in: African Spectrum, 48, 2, 71-83.
[iii] Alagoa Morris, 21 July 2020. Eight Months After, Spill on Shell Pipeline Declared Equipment Failure. Environmental Rights Action / Friends of the Earth Nigeria.
[iv] Health of Mother Earth Foundation (HOMEF), 5 May 2020. Massive death of fish across the Atlantic coast of the Niger Delta: A Field Report.
[v] FishNet demands:1. [Nigerian] Government must see this incident as a major ecological disaster and ensure that the cause of the pollution is quickly detected, and the public is duly alerted; 2. There should be adequate sensitization to raise the awareness of people especially in the coastal communities to ensure that the dead fish are not consumed or sold in view of possible health implications; 3. The true cause of the incidence should not be concealed but be revealed, addressed, and let the perpetuators be duly held liable for the ecological crime; 4. Government should urgently carry out a health audit in affected coastline communities to ensure their health status and offer treatment, as necessary; and, 5. Fishers and community folks should promptly report future occurrence of similar incidents to relevant authorities and stakeholders.