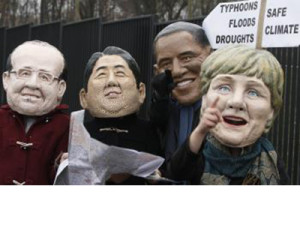 If negotiations at the Paris climate conference drag on past the December 11 deadline, it will likely be due to wrangling over financing for climate adaptation in developing countries.

Earlier Conferences of the Parties (COPs) have failed due to disagreements between low-income and industrial countries, or ended with compromises worked out in backrooms or in huddles on the floor of the plenary hall.

The landmark 2009 Copenhagen Accord set a goal of US$100 billion a year by 2020 to help poor countries cope with the impact of climate change. Bolivia led several developing countries in objecting the Accord, which was negotiated in secret by 26 countries on the fringes of COP 15.  In the end, delegates “took note” of its contents but it was not endorsed by all 193 member states in attendance.

The US$100 billion target became the operative goal only after U.S. Secretary of State Hillary Clinton arrived in Copenhagen. Until then, the discussion had been about providing 100 billion Euros per year. The Euro was worth about 1.43 US dollars, so Clinton effectively lowered the goal by almost one-third.

The Copenhagen Accord further pledged: “This funding will come from a wide variety of sources, public and private, bilateral and multilateral, including alternative sources of finance.” A struggle then ensued to work out what this promise might actually mean in practice.

The next year, at COP16 in Cancun, Mexico, the US$100 billion goal for climate finance was adopted by the whole conference. A new Green Climate Fund was set up, but no money was pledged. During the Cancun conference, several KAIROS partners from the global South staged a rally to protest the World Bank’s role in climate finance.

Speaking before the 2015 Paris conference, World Bank vice-president Rachel Kyte wasquoted in The Guardian as saying that COP 21 should not even set a target for financial assistance to developing countries: “The $100bn was picked out of the air at Copenhagen. … If you think about the global economy and the challenge for finance ministers in developed countries, I’m not sure that an abstract number like $100bn is helpful.”

A controversial 2015 report by the Organisation for Economic Co-operation and Development (OECD) in collaboration with Climate Policy Initiative (CPI) gives preliminary data on climate finance for 2013 and 2014. It estimates that an average of US$57 billion a year was raised with $22.8 billion coming from bilateral public sources, $17.9 billion from multilateral development banks, $1.6 billion from export credits, chiefly for renewable energy projects, and $14.7 billion from private sources.

Civil society critics of the report point out that the financing consists mostly of loans (many with conditions attached) with only US$13 billion of the 2013 amount coming in the form of grants. Also, some countries count funds that were previously committed as Official Development Assistance (ODA) as climate finance, violating an understanding that the latter is supposed to be additional to ODA.

Lidy Nacpil, a KAIROS partner who coordinates the Asian Peoples’ Movement on Debt and Development, states that the methodology employed for the OECD report is an example of green washing and creative accounting that overstates the amount of climate finance available to developing countries. She calls on developed countries to come forward with some real money since climate finance could be the deal breaker in Paris.

Another dubious source for climate finance is revenues raised through the sale of emission credits on carbon markets. One worrisome development is how the World Bank is forging ahead with the promotion of carbon markets as a preferred way of  fighting climate change without waiting for the Paris conference. Our Briefing Paper on Pope Francis’ encyclical Laudato Si includes a strong critique of the pitfalls of relying on international carbon markets as a means of combating climate change.

At COP 19 in Warsaw in 2013, 133 developing countries staged an unprecedented walk-out over the refusal of industrialized countries to commit to indemnifying low-income countries for the losses and damage they suffer due to climate change caused primarily by greenhouse gas emissions from the global North. The World Bank estimates that economic losses due to climate change averaged US$200 billion a year over the previous decade. A compromise in Warsaw kept the issue of loss and damage alive pending consideration at COP 20 in Lima where decisions were again postponed until COP 21 in Paris.

During pre-COP 21 negotiations in Bonn in October, South African Ambassador Nozhipo Mxakato-Diseko, speaking on behalf of all developing countries, stated: “The core agreement on finance…is the yardstick of success [for the Paris COP] not what is announced by the World Bank.”

What then should be Canada’s response? The Climate Action Network advocates a Canadian contribution of $4 billion a year in public finance for developing countries, coupled with a commitment to end all subsidies for fossil fuels. This is a reasonable demand that will serve as a measure of the new government’s commitment to climate justice.