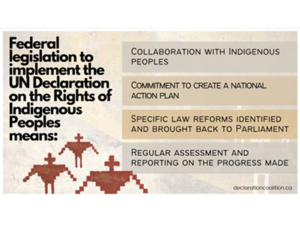 The members of our coalition are appalled by acts of violence and intimidation against Mi’kmaw fishers exercising their Constitutionally protected, legally affirmed, inherent and Treaty rights. The federal and provincial governments bear responsibility for their long-standing failure to ensure that rights affirmed by the Supreme Court 21 years ago are protected and respected.

It is our hope that the shocking events of recent weeks can still lead to a positive outcome for the Mi’kmaw people and their Treaty partners. This is a test of Canada’s commitment to implement the UN Declaration on the Rights of Indigenous Peoples. The Declaration, adopted as a global standard eight years after the Supreme Court 1999 Marshall decision, provides important guidance for moving forward in what the Declaration calls “a spirit of partnership and mutual respect”.

Mi’kmaw fishers must be able to exercise their inherent and Treaty rights to catch and sell lobster free from threats to their own safety and to their property. These rights must be interpreted and applied in a manner consistent with Canada’s obligations under the Declaration and the Constitution of Canada, to uphold the rights of Indigenous peoples – and not be used as an excuse to further entrench poverty and economic marginalization.

It must be emphasized that the Mi’kmaw fishery is miniscule in comparison to the non-indigenous lobster fishery, and faces ongoing racist opposition in other forms, such as the collusion by lobster buyers to refuse the purchase of Mi’kmaw caught lobster.

The federal and provincial governments should support Mi’kmaw governments in instituting their own livelihood fishery systems based on their traditions, values, legal orders, and ecological knowledge. Any limitations must be strictly justified by clear conservation purposes and should be developed jointly with the Mi’kmaw people. In the meantime, the failure to support and implement a livelihood fishery by government for the Mi’kmaw lobster fishery cannot be an excuse for the recent and ongoing lawless acts against the Mi’kmaw.

While the Declaration should always be read as a whole, the following provisions are important to highlight in the current context.

These provisions of the UN Declaration are reinforced by the fact that similar human rights protections are also affirmed in the American Declaration on the Rights of Indigenous Peoples, adopted by the Organization of American States as the minimum standards for the hemisphere.

The Truth and Reconciliation Commission of Canada called the UN Declaration on the Rights of Indigenous Peoples “the framework for reconciliation at all levels and across all sectors of society.” Our coalition encourages the federal and provincial governments to apply this framework as they work with the Sipekne’katik First Nation and other Mik’maw governments to ensure that their rights are respected and can be exercised in peace and security.

The Coalition for the Human Rights of Indigenous Peoples (www.declarationcoaliton.ca)