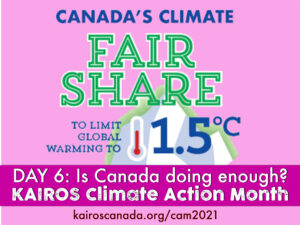 This week, Climate Action Month focuses on the ambition needed in Canada to reduce greenhouse gas emissions and bring about a just transformation for our society and economy. Canada has missed every emissions reduction target it has set to date. As of 2019, Canada had seen only a slight net decrease of 9 Mt or 1.1% from 2005 emissions. Decreases in some sectors of the Canadian economy in this period have been offset by increases in emissions in the oil and gas, and transportation sectors. We need strong climate leadership to drive emissions down and end the development and expansion of oil and gas and robust implementation of accountability measures to ensure we never miss another target.

This week, Climate Action Month will explore Canada’s current climate plans and commitments and whether they are enough to limit global temperature rise to 1.5°C (Spoiler alert! They are not). We’ll discuss what we need to do to hold the new federal government accountable to its climate targets, what is needed for a just transition that addresses current inequities, and how to make the shift away from fossil fuel dependence a reality. On Friday, we’ll focus our actions on supporting the Fossil Fuel Non-Proliferation Treaty.

Today, we begin Climate Ambition and Just Transition week by examining the targets that Canada needs to set in order to make a fair-share contribution to global efforts to maintain temperature rise below 1.5°C.  This is the threshold set by the Intergovernmental Panel on Climate Change (IPCC) that we need to meet to avoid catastrophic climate change impacts on the planet.

Canada’s emissions reduction target is sometimes referred to as its nationally determined contribution (or NDC). NDCs became a foundation of the Paris Agreement. They are non-binding national plans highlighting climate actions, including emissions reduction targets but also policies to respond to the climate emergency. Every country that ratified the Paris Agreement is required to submit NDCs every five years. The website Climate Action Tracker analyzes NDCs of countries around the world and rates them on whether they are consistent in holding global temperature rise to 1.5°C and whether they reflect the country’s fair share contribution to global efforts. Climate Action Tracker rates Canada’s NDC as insufficient. If all countries were in this range, warming would surpass 2°C and up to 3°C.