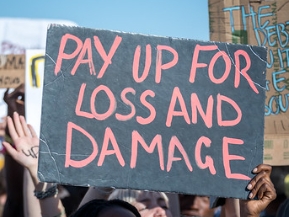 As the dust settles on COP27, held in Sharm al-Sheikh, Egypt, the Climate Action Network-Canada (CAN-Rac) offers its assessment on the climate conference’s outcomes through the following press release, which quotes Radia Mbengue, KAIROS’ Global Partnership Coordinator: Africa and Climate Justice. KAIROS is a CAN-Rac member.

COP27 establishes historic fund for loss and damage, led by the collective action of Global South leaders and allies and civil society

COP27 in Sharm el-Sheikh has ended with the historic creation of a United Nations loss and damage fund, directly tackling the consequences of climate inaction and fossil fuel expansion. Climate Action Network Canada joins communities from the Global South, island states, and civil society worldwide in celebrating this global agreement after a thirty-year-long fight.

This decision sends a message of climate justice and hope that polluters will be made to pay up for the suffering they are inflicting and that those on the front lines of the climate crisis will have support to rebuild and recover.

Canada – a major and historic emitter – played an important role in offering early support for the call of climate-vulnerable nations.  Now, it must extend this support by committing funding and ensuring that the set-up of the fund is led by and responds to the needs of the most vulnerable countries.

We are fighting for our survival. At COP27, the interests of polluters flooded negotiation rooms and blocked any progress on naming the cause of the climate crisis – fossil fuels. COP27 closes with a declaration that makes no mention of phasing out fossil-fuels, but with a growing consensus – led by India, Colombia, and the Alliance of Small Island States – that a climate process that doesn’t tackle fossil fuels is a hijacked process that fails to protect people and communities around the world.

In Canada, keeping 1.5 alive means taking fossils out of our electricity grid, cars, and homes and buildings. To do so will require implementing key climate policies with ambition and rigour, while avoiding caving in to industry’s pressure.

This COP has brought international attention to the connections between human rights and climate justice. The closing of COP27 must not mean the end of the spotlight on human rights and the need for all prisoners of conscience to be freed. Climate Action Network Canada will continue standing in solidarity with defenders of human rights and calling for open civic space everywhere.

Key takeaways from the COP27 outcome:

“This moment is a testament to the power of civil society and countries of the Global South. In the face of horrifying climate impacts and stalling tactics from rich nations, we have witnessed the strength of our collective action. Climate justice will only be possible if we kick polluters out of all our climate policy and decision-making spaces, so that they can no longer hold back our movement towards a safe and fossil-free future.”

“The two issues that dominated COP27 were fossil fuels and loss and damage: the root cause of the climate crisis, and the devastating consequences of climate change – two things this process has not had the guts to address for 30 years. A landmark decision to establish a loss and damage fund is worthy of celebration, but the absence of a call for an equitable phase-out of all fossil fuels – oil, gas, and coal – is a major failure. On both issues, Canada showed up much more constructively than ever before, though it was the last of its closest allies -including the US and UK- to get on board with stronger language on the need for just energy transitions away from all fossil fuels. The door was opened at this COP to the real conversations needed to deliver on the goals of the Paris Agreement and hold warming to 1.5 degrees – Canada must join other countries and civil society to ensure COP28 seals the deal.”

“What happened today is an historical recognition of the responsibility of developed countries. We still have a lot to do. Right now, the climate crisis is costing worker lives and livelihoods. It’s destroying physical and mental health, putting workers in jeopardy and forcing many to migrate. We need more, and we need just transition now!”

“After thirty years, Canada and countries across the world finally recognized that rich countries must pay up for the loss and damages from climate disasters caused by our decades of carbon emissions. Addressing loss and damages is momentous – and is thanks to the resolute unity of the brave activists and advocates from countries that are most vulnerable to the climate crisis. We have also seen the beginning of a consensus at this COP on the need to reform the private financial system in line with climate safety, and we will be watching for Canada to act on this back home. Still, despite evidence that money must flow out of problems and into solutions, rich countries have failed to act on the science, which shows that delaying a phaseout of fossil fuels will only compound future climate disasters.”

“Finally, we can speak of a milestone for climate justice at COP27. Thanks to the mobilization of the Global South countries and civil society for decades, the issue was finally added to the negotiations’ agenda bringing on this rapid agreement to set up a fund for loss and damage. While we acknowledge this unexpected breakthrough, we cannot pretend that it isn’t overshadowed by the influence of fossil fuel lobbyists. They have succeeded once again in preventing the real problem from being addressed in the final cover decision: fossil fuels. On this point, Équiterre strongly condemns the lack of commitment from Canada on this issue that was far from acting with leadership in the matter.”

“Canada’s active refusal to phase out of fossil fuel is a dangerous insult to common sense planetary life simply can’t afford. After decades of sweeping the necessity for loss and damage under the rug despite sustained activism by Global South civil societies, the creation of a fund marks a crucial historic milestone. But a lot of work remains to be done not to abandon the most vulnerable countries to deal with the devastating effects of a crisis they have not caused, and there can be no coherence without addressing mitigation.”

“Once again, the oil lobby has the ear of the Canadian government while the demands for urgent action from those most affected by the climate crisis go unheard. Despite a positive contribution to the establishment of a Loss and Damage Fund, Canada has not proposed a more ambitious target or announced new significant measures to accelerate GHG reduction. It also has not significantly increased its funding to help developing countries reduce their emissions and adapt to extreme weather events. In failing to raise its actions to match the scope and urgency of the climate crisis, the Trudeau government is failing Canadians and the world.”

“History was made in Sharm El Sheikh: Major polluters have been put on notice. The time has come for them to be held accountable for the harm they’re causing and pay up their ecological debt. The creation of a new loss and damage fund is an opportunity to build trust and revamp international solidarity towards a just word. This fund is long overdue, so today it’s a day for justice to the billions of people that have been victims of the climate crisis. Now it’s up to the international community to ensure this fund becomes operational and serves the most vulnerable communities and brings a new chapter for stronger cooperation.”

“Establishing a loss and damage fund is a first step towards decolonizing climate action. We need to ensure these funds are truly accessible to the most vulnerable and that developed countries, including Canada, are held accountable for the impact of their resource extraction companies around the world, especially on racialized communities. This is just the continued colonization of our lands. Our fight for environmental justice must be a fight for racial justice. Funding is not enough in the face of injustice and continued violence and impunity.”

“Children and youth must be at the heart of all climate decisions. We are encouraged by the commitment made at Cop27 to create a historic loss and damage fund — it offers a glimmer of hope for kids facing an inhospitable future. This breakthrough is sabotaged by the failure to clearly signal the phaseout of all fossil fuels. This means children everywhere will face more extreme climate events, loss and damage.”

For more information or to arrange an interview, contact: