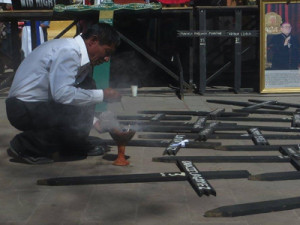 During a recent visit with partners in Chiapas, Mexico in late January, KAIROS’ Rachel Warden joined a delegation organized by the Jesuit Forum of Canada and participated in activities commemorating the 5th anniversary of the death of Don Samuel Ruiz, the beloved Bishop of San Cristobal for 40 years. On January 25 she participated in a pilgrimage and mass honouring of Don Samuel that drew more than 5,000 peoples from communities throughout Chiapas. It was an incredible experience; a powerful expression of the legacy and work of Don Samuel Ruiz, and the resilience, organization and deep spirituality and faith of the Indigenous peoples of Chiapas.

The following reflection from that day was written by delegate, Mary Ho Curtsinger, csj

In many ways today was a focal point, or part of a rising crescendo, or a culminating moment of our time here so far, and certainly it will be a lens through which we revisit the entire journey.  This is the fifth anniversary of the passing of beloved bishop jTatik Samuel Ruiz (though yesterday was the actual anniversary date.) The events of this day reverberated with his memory and more, his spirit of inclusion, solidarity, empowerment and liberation.

We walked or taxied to the bus station, the convergence point for the “believing people” pouring into San Cristobal from all directions of the countryside. While awaiting their arrival, we huddled together to hear the words (translated by Michel, Arturo and Rachel) of the Pueblo Creyendo, their letter to Pope Francis as well as their manifesto of their lived situation, naming their sufferings and hopes, together with all of Madre Tierra.

The people arrived, bearing banners proclaiming their dignity in their persons and words, their faces set like flint against the injusticia in esta dia. We joined their number and cadence, responding “Vive!” to the leaders’ cries for fullness of life.

Arriving at the Cathedral zocalo, we were among those close to the front and makeshift altar, so were able to turn and watch the various Indigenous groups process in front of the altar after being announced by a community leader from the podium. The people flowed forward together, some in traditional dress, their faces tired yet shining, clear-eyed yet sombered, unspeakably, heartbreakingly beautiful.

Perhaps the most salient was the procession of the people of Acteal, forty-five of them bearing a cross with the name and age of each of the martyrs of December 22, 1997, slain by state-sponsored gunmen. To actually recognize some of the people we’d shared eucharist with (three days ago in Acteal) intensified the experience all the more.

The Indigenous women of our group–Rosella, Lise, Eva and Priscilla–gathered together at the altar, along with Arturo who would translate Rosella’s words into Spanish for the whole assembly. Sylvain and David were also there as co-celebrants. Rosella spoke with passion and eloquence of the shared significance of solidarity of the Canadian Indigenous people with those here in Chiapas. Bishop Felipe also invited Sylvain’s words of greeting and solidarity from all the Canadian delegation. It was most amazing to be there!

Co-adjutor bishop Enrique delivered a rousing, impassioned homily–which, Michel observed, really marked his arrival as new bishop for and with the people. Drawing on the first reading from Acts – the appearance of the Risen Christ to Saul on the way to Damascus – Enrique invited the assembly to join the refrains  “Why are you persecuting me?”, followed by “Go into the whole world and proclaim the Good News!” (Mark 16)  It was wonderful to observe the various and many ways that Indigenous spirituality was integrated into the liturgy, including an opening blessing around the Mayan altar, and proclamations in Indigenous languages.