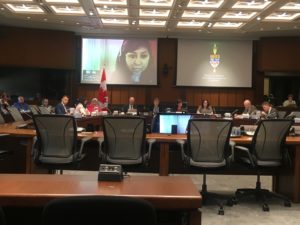 Gloria giving her testimony about the SDIR study on WHRD

Gloria giving her testimony about the SDIR study on WHRD

KAIROS welcomes the release of “Raising Her Voice: Confronting the Unique Challenges Facing Women Human Rights Defenders,” the Subcommittee on International Human Rights of the House of Commons Standing Committee on Foreign Affairs and International Development’s report on women human rights defenders (WHRDs). The Subcommittee listened to the testimonies of WHRDs from across the globe, including that of Gloria Chicaiza who is the Mining Justice coordinator at KAIROS partner organization Acción Ecológica (Ecuador). The report concludes that the Government of Canada needs to do more to support the women who do the work of and face the consequences for defending and protecting human rights.

WHRDs do need support. As Gloria and many of the other women who testified in front of the Subcommittee declared, WHRDs face repercussions for their work across different spheres of life, at home, in their community, and at the state-level. WHRDs are stigmatized, criminalized, threatened, and assassinated for their defense and protection of human rights. What is more is the fact that criminal justice systems and international legal frameworks tend to fail WHRDs.

The evidence is more than anecdotal.

Globally, and especially in Latin America, there has been an alarming rise in the number of human rights defenders targeted and killed. The perpetrators and intellectual actors of these crimes are rarely brought to justice. On the one hand, impunity is rampant and on the other, the safety and well-being of WHRDs are not taken seriously. WHRDs often experience multiple and compounding forms of violence, not only because they are women but also because these women are Indigenous, and racialized, and working-class, and….

“Raising Her Voice” states that “the best way for Canada to support WHRDs abroad is to bolster their work and to foster a strong, secure and independent society.” To accomplish this, the Subcommittee offers four recommendations:

1. That the Government of Canada create an action plan to safeguard the security of WHRDs;

3. That GAC promote respect for human rights in the private sector, particularly through the office of the Canadian Ombudsperson for Responsible Business Enterprise (CORE);

4. That the Government of Canada, through diplomacy, ensure foreign policy decisions support WHRDS.

KAIROS agrees: The Government of Canada needs to address the multiple and interlocking forms of violence that WHRDs experience, and the four recommendations in “Raising Her Voice” have the potential to be meaningful first steps.

WHRDs do require better social and institutional support, but more must be done, expressly in the area of corporate accountability.

Promoting human rights in the private sector through the current CORE, an office with no investigatory powers, will do little. The Government of Canada needs to require the private sector to abide by local, national, and international human rights and environmental laws. The Government of Canada must also enforce these laws and make the Canadian court system accessible to WHRDs who allege human rights and environmental violations against Canadian companies operating abroad.

WHRDs are defending and protecting a notion of life, grounded in a planetary view, that is just and equitable. Yes, the raised voices of WHRDs need to be listened to. But most of all, WHRDs must be recognized as global leaders and granted decision-making powers; anything less imperils us all.