Bringing the experience of Latin American women to the International Peoples Conference on Mining in the Philippines. 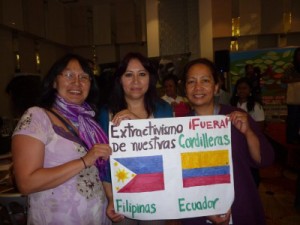 The International Peoples Conference on Mining (IPCM) in the Philippines took place amongst a multitude of symbolic and cultural acts.

The event was highly participatory and integrated a number of key themes including:

The conference brought together 140 representatives from 29 countries and 6 continents.

We talked about how many governments do not respect human rights and the environment and do not recognize the right to territory. Throughout the world, the rights of Indigenous peoples are being violated. When rights are recognized, often as a result of peoples’ struggles and resistance, they are not applied or implemented. Sadly, governments typically support mining companies above the rights of citizens and the environment.

We also learned and shared testimonies of how destructive mining operations have been stopped or prevented when local communities have resisted and asserted their rights.

there is a need to strengthen local organizations, support campaigns, increase government advocacy, and look for international education and advocacy opportunities. We spoke of the need to generate new spaces such as tribunals to address the impunity of mining companies, and to improve legal initiatives for defending affected communities and community leaders who are criminalized for their resistance to mining. There was a recognition that the most successful global campaigns address specific cases involving mining companies operating in distinct territories. There is a need to amplify these successful experiences to spread hope to other struggling communities.

Sharing the concept of Buen Vivir

For the panel on regional contexts on the first day of the conference I was invited to do a presentation on the situation in Latin America. My presentation was well received and brought attention to the theme of Sumak Kawsay, buen vivir, or living well in harmony with Mother Earth, as an alternative world view originating from the South.

Workshop on Women and Mining

Later, at the workshop on the gendered impacts of mining, I spoke about how women are impacted by mining in Latin America, the criminalization of women, and how mining operations reproduce patriarchal structures. In many cases the arrival of mines in Latin America has led to greater disadvantages and more negative impacts on women who become the caregivers of vulnerable bodies affected by mining. Even women who manage to find work in the mines are disadvantaged because they continue to bear the bulk of the responsibilities in the domestic and private spheres.

At the same time, I was able to highlight how the IPCM is one example of how women continue to increase their participation and visibility in diverse national and international networks to draw attention to these issues and to advocate in favour of women affected by mining.