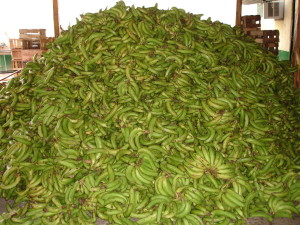 By Adriana Cabrera-Velásquez of Paipa, Boyacá, Colombia with an MDiv. From Earlham School of Religion, Richmond, Indiana

Today is the fourth Sunday of Lent. Today we celebrate God´s unfailing Love surrounding those who trust in Her (Psalm.32:1). Such is the common theme of both Psalm 32 and Joshua 5.

Psalm 32 describes the condition needed for this act forgiveness: a heartfelt confession that people have distrusted God repeatedly during the journey (Psalm 32:5). It also describes acknowledgement of fulfillment of such condition: God´s blessing upon those forgiven (Psalm 32:1).

At the core of this cleansing of hearts and the beginning of a new era in God´s relationship with the people lies agriculture.

The wonderer´s arrival to Canaan is marked by two significant moments: circumcision of all males who have arrived, liberating them from the guilt of their sinful ancestors (Joshua 5:2); and God´s provision of people´s right to nurture themselves from produce of the land, by stopping manna from its continuous falling (Joshua 5:12).

This two fold act is determined on one hand by a specifically male act of blessing: Circumcision, followed on the other hand by an innately female consequence: nurturing body and mind not any longer through dispensation of bread from heaven, but through the gifts of Mother Earth, who only come through human cooperation with God.

In this particular time of Lent, when Christians are called to prepare their hearts for the coming of Holy Week, a time when our tradition commemorates the hardest as well as celebrates the most glorious of events, we are called to cooperate with God in harvesting our own nurture.

God provides manna to a hungry and distrustful people in the dessert as an act of provision for survival. Manna, however, is not acceptable as an offering. If one wants to worship God, one has to offer the produce of human cooperation with the Divine, which nurtures both God as well as God´s creation.

The transgressions forgiven upon arrival to Canaan consist on the people not trusting their own journey, and instead, passively waiting to be assisted by God´s Mercy, demanding a sign Presence.

In this time of preparation for Holy Week, may we trust that God is with us and at the same time cooperate with God in the active embodiment of our present and forging of our future.

Only then we heal our relationship with God and prepare our hearts to follow God´s will, which is none other than to pursue our own genuine happiness.

As Jesus himself said, “Your ancestors ate manna and died, but whoever feeds on this bread will live forever.” (John 6:58).