Bracing for violence, praying for justice 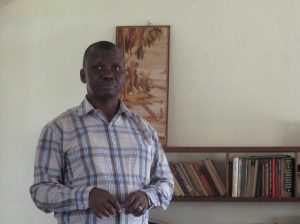 The Congolese people are bracing themselves for social unrest and violence after the mandate of President Joseph Kabila expired at midnight on Monday, December 19.

“Thank you for your constant concern to hear from us, particularly during this turbulent period in our country, the Democratic Republic of Congo.

We are all doing well. Our only major concern, for the moment, is the critical situation prevailing in Kinshasa, Lubumbashi, Goma and elsewhere. The situation is still stable throughout South Kivu province. Nevertheless, life was quiet on Monday, December 19 in Bukavu and Uvira. Shops and schools were quiet, and traffic was light.

We will keep you regularly informed about how things evolve. Sending you our warmest greetings!”

The military and police have been heavily armed and out in force in the major centres of Kinshasa, Lubumbashi and Goma this week. Similar to Bukavu, the streets of the capital, Kinshasa, were eerily quiet during the day on Monday, with many people choosing to stay home out of fear. Overnight, gunshots were reportedly heard in two neighbourhoods in Kinshasa. On Tuesday, demonstrators calling for Kabila to step down and carrying signs that read “Bye, bye, Kabila” were attacked by police with tear gas. At least 20 people have been killed in clashes with state authorities.

Information coming out of DR Congo has been sporadic. On Sunday, President Kabila ordered a widespread shutdown of social media in DR Congo in a ploy to curb dissent and hinder popular protests. Sweeping arrests of journalists and opposition party supporters were being reporting in the days leading up to the end of Kabila’s second and final term in office. Last month, the website of Héritiers de la Justice was the victim of a cyber-attack, which Mr. Kwigwasa believes was politically motivated and done in retaliation for their important human rights work. Their website was also attacked back in 2005, shortly following the assassination of then-executive secretary, Pascal Kabungulu.

KAIROS asks you to join us as we hold the people of DR Congo in our prayers at this tense moment. Democracy and peaceful political expression are universal human rights that our Congolese partners have been promoting and defending for many years. As Canadian churches, we stand alongside them in a spirit of faith, solidarity and love.