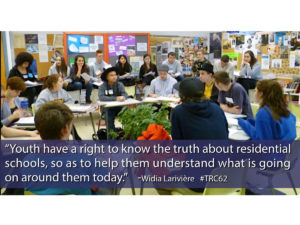 Alberta’s plan to train teachers to ensure all students in the province learn about the history and contributions of Indigenous peoples in Canada is one big step towards realizing the full implementation of the Truth and Reconciliation Commission of Canada’s (TRC) Call to Action #62.i. On June 22, the Alberta government advised that it will honour its commitment to the TRC by providing teachers with professional development, and by signing a “Joint Commitment to Action” with seven organizations.

This announcement came on the heels of another major statement regarding significant changes to the province’s school curriculum that will be rolled out over six years and include the TRC’s Call #62.i, also known as Education for Reconciliation.

TRC Call #62.i urges provincial and territorial governments to ensure that all students learn about residential schools, Treaties, and the contributions of First Nations, Inuit and Métis peoples in Canada.

“KAIROS is very encouraged by this news,” said Ed Bianchi, KAIROS’ Program Manager. “While Alberta was making good headway in its public commitment to realizing #62.i, according to our report card, it needed to set deadlines to meet those commitments. This announcement provides a clear and collaborative course for the province to fully realize #62.i, and we hope it will inspire other provinces to follow Alberta’s lead.”

Alberta’s comprehensive curriculum changes will include six subject areas in addition to Education for Reconciliation. The goal is to develop “a common design and student-centred direction, which will ensure consistency across the K-12 curriculum.”

Alberta Education plans to consult Albertans on the new curriculum this September. Four million dollars in existing funding will be spent on consultation with Indigenous partners.

KAIROS will continue to encourage its members in Alberta to collect signatures for its petition campaign, which was created to help build the political will for all provinces to realize TRC Call #62.i.

“The signatures will help demonstrate to government representatives in Alberta that their constituents support these exciting plans to fully implement Education for Reconciliation,” says Bianchi. “They will show that people care, are watching, and will continue to monitor progress until full implementation is achieved.”

One exciting and related development is the Alberta Teachers’ Association’s (ATA) bold goal to introduce the KAIROS Blanket Exercise, which teaches the history of Canada from the perspective of Indigenous peoples, to all 40,000 teachers in the province within three years.

“The ATA wants every teacher in Alberta to experience the  KAIROS Blanket Exercise, and they’re working on scripts that are specific to the three Treaty areas in the province,” says Bianchi. “We applaud this initiative, which will complement the province’s curriculum changes.”

The Alberta government will collaborate with several organizations including the Alberta Teachers’ Association and the National Centre for Truth and Reconciliation “to develop professional development for teachers so that all students learn about the culture, history perspectives and contributions of First Nations, Métis and Inuit people.”

According to the Alberta government’s announcement, “representatives from the collaborating organizations signed a Joint Commitment to Action that will ensure that all K-12 teachers receive additional training related to First Nations, Métis and Inuit history and culture within the next two to three years.”