A trip to Mankayan, a mining town in the mountains of the Philippines 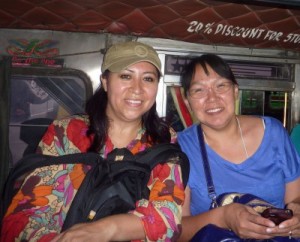 Our time in the Philippines has been very intense. We have been here less than two weeks and we have already visited communities in Mankayan, Cordillera and participated in the 3-day International Peoples Conference on Mining in the Philippines.

On the first day of our trip to Mankayan we stayed at a hotel in Baguio, met with some of the indigenous people there and learned about the state of the area and what to expect. After the meeting we spent some time at the tailings pond. The lake was pretty much ruined by pollution from the mining. Actually a lot of the landscape was also affected.

We went to a nearby community to meet with a family and local organizers. We stayed the whole day. We had a break from the meeting in the middle of the day because the rain was so heavy that the translators could not be heard. We had 3 people translating into English, Tagalog and Spanish. During our break we had a meal. Some of the people were pretty amazed that the men were cooking. They were not used to seeing men doing housework. When this was brought up the locals explained that the husband and the wife share responsibilities equally regardless of whether it’s with children, housework or farming … whatever needs to be done.

While at this meet

ing we learned that there are a lot of health problems due to the environment being impacted. Before mining, the community had always swum in the lake, but with the tailings they can no longer swim safely. When they do swim they end up with terrible rashes on their bodies and if they accidentally swallow some water they may develop respiratory problems as well. The health problems that were mentioned were rashes, respiratory issues and a lot of women having miscarriages. Many of the livestock that drank from the area have died and the vegetation is severely impacted too.

After a lot of our questions were answered, I asked if the local government was helping at all. Unfortunately they said no and so I asked again to see if anyone is helping them at all. One of them smiled and talked about international solidarity. We were fed very well that day and ate some fruit that came directly from one of the trees. On our way back there were some landslides. The roads are being expanded all around without putting proper structures so they will be even more unstable than to begin with.

That night when we got back to our house we ate dinner and pretty much went to bed right away. The next day we had a little bit of a breathing room due to the arrival of a journalist. We had enough time to leisurely eat breakfast and shower before our travels back Manilla for the conference.