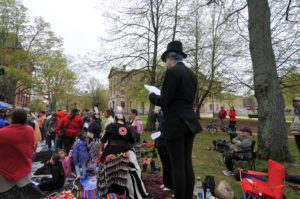 They spanned all ages. They were Indigenous and non-Indigenous, and came from all walks of life. Some had participated in the KAIROS Blanket Exercise many times. For many more, it was their first time.

More than 1,000 people participated in eight Mass KAIROS Blanket Exercises and one reconciliation event in capital cities from St. Johns to Victoria starting May 28 in Charlottetown and ending June 5 in Whitehorse, marking the one year anniversary of the Truth and Reconciliation (TRC)’s release of its 94 Calls to Action. Victoria held a reconciliation event called 94 Calls for Justice where all 94 TRC Calls were creatively read out on the steps of the BC legislative Assembly.

“Having the mass Blanket Exercise in cities coast-to-coast helped build relationships locally, and helped local planners realize just how big this event really was,” says Katy Quinn, KAIROS’ Indigenous Rights Program Coordinator. “I think we were all in awe of its magnitude and collective success. The local leadership really made this happen.”

“The Mass KAIROS Blanket Exercises got off to a great start in Charlottetown,” says Shannon Neufeldt, KAIROS’ Network & Young Adult Coordinator. “There was a great youth presence, with one child on the head drum. The organizers also had access to great costumes, helping with the visuals and spirit of the Exercise. We were also thrilled that the Native Council of PEI involved the Abegweit First Nation, the Aboriginal Women’s Association of PEI, and the UPEI Mawi’omi Aboriginal Student Centre.”

Youth presence was also felt in other events, particularly Ottawa and Toronto where KAIROS partnered with the Assembly of Seven Generation and Canadian Roots Exchange, respectively.

“The Indigenous youth leadership was important and set the tone in Ottawa,” said Quinn. “Their leadership provided a sense of hope for the future.”

Theland Kicknosway, who is 13 years old, led the round dance that concluded the Ottawa event.

“Theland had us snaking us all over the place,” says Quinn. “He added wonderful youthful energy and playfulness to the dance.”

Another highlight in Ottawa was Frazer Whiteduck’s presence and speech. Whiteduck, who is with the Assembly of Seven Generations, planted the seed for the Mass Blanket Exercise on Parliament Hill last year to mark the end of the TRC but could not attend then. He was honoured to be at the Ottawa event this year, and to see his vision spread across the country.

In Toronto, the Mass Blanket Exercise followed a formal apology to survivors of residential schools by Ontario’s Premier, and was covered on CBC’s The National. One participant – Jane Kilthei serendipitously stumbled on the Mass KAIROS Blanket Exercise in Toronto. She was moved to post the following on Facebook on May 31:

“I was walking back from a meeting through Queen’s Park when I saw a KAIROS banner and people setting up a sound system and laying out a grid of blankets under the trees. Without knowing in advance that this was happening, I had the great privilege to hear elders and indigenous activists speak and participate in the powerful and heart-rending Blanket Exercise there are on the lawn, in the shadow of the legislature, at the same time as Premier Wynne was expressing her apology and changing the name of the ‘Ministry of Aboriginal Affairs’ to the ‘Ministry of Indigenous Relations and Reconciliation’ inside, and to know that this spirit is moving all across Turtle Island. We have much to do and I was reminded that there is a heart-filled movement alive in the land.”

Stephen Kakfwi and Canadians for a New Partnership will also re-engage with the campaign in the fall, as KAIROS members in other provinces start their meetings with their provincial representatives.

Pictures say a thousand words. Here are photos of the events across the country.