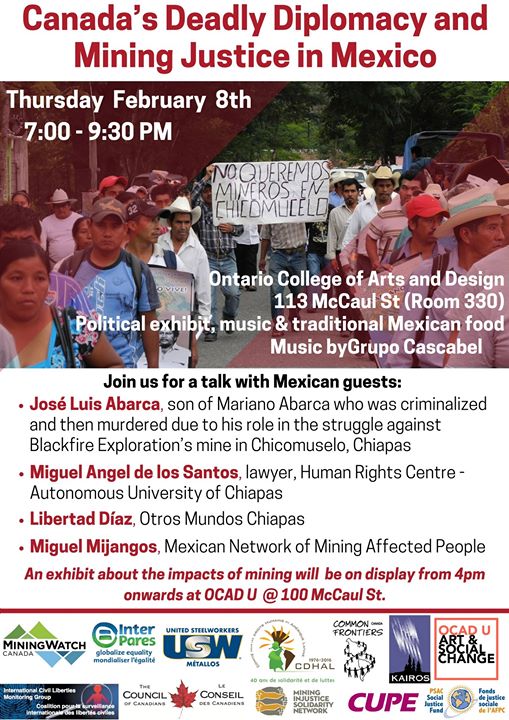 More than eight years since the murder of Mariano Abarca, an outspoken community leader in Chiapas Mexico, his son, and a group of Mexican human rights defenders are coming to Canada in search of justice. Mariano led his community’s struggle against the social and environmental impacts of Canadian company Blackfire Exploration’s barite mine.

Join us in solidarity with our Mexican guests for an evening of discussion, shared food, and music. We will also be presenting the Toronto premiere of an interactive political exhibit developed in Mexico presenting photos and text describing the social and environmental impacts of the dramatic development of the Canadian mining industry in Canada and abroad.

The delegation includes:
**Luis Abarca – son of Mariano Abarca who was criminalized and then murdered due to his role in the struggle against Blackfire Exploration’s mine in Chicomuselo, Chiapas
**Miguel Angel de los Santos – lawyer for the Abarca family from the Human Rights Centre – Autonomous University of Chiapas
**Libertad Díaz – representing human rights and environmental organization Otros Mundos Chiapas
**Miguel Mijangos – representing the Mexican Network of Mining Affected People, with experience working with mining-affected communities in Guerrero and Oaxaca

Note: This event will happen in two parts. We will all start at 7pm in Room 330, 113 McCaul St., OCAD U, for a panel discussion, then move together across the street to the lobby of the main OCAD U building at 100 McCaul St., where there will be a photo exhibit, refreshments, traditional Mexican food (by Santo Pecado Mexican Catering) and Music by Grupo Cascabel. Plus a chance for casual conversation with the delegation members and each other.

• Find up-to-date details on the delegation and further information as it becomes available at justice4mariano.net.
• For more information, contact Raul Burbano burbano@rogers.com or Rachel Small rsmall@canadians.org