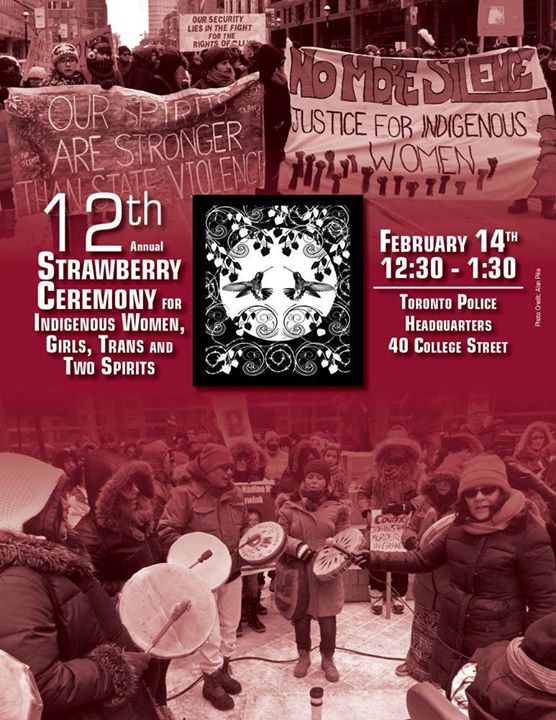 Please leave your agency, institutional and organisation banners at home and instead make signs in honour of women, girls, trans and two-spirit people who have died violent and premature deaths.

Singers, song keepers and drummers please bring your drums for the ceremony. Drummers from the organising committee, with the direction of Wanda, will be leading songs. Jingle dress dancers are also called to join on the march. Please contact us if you can participate so protocols can be observed.

We recognise that February is out of season for a ceremony involving strawberries, but the violence we are experiencing is also a disruption in our traditional ways of life.

Media and public attention to this issue has continued to grow since we gathered last year but Indigenous women are still going missing and being murdered. No More Silence has continued to work hard to create a community-owned database in collaboration with Families of Sisters in Spirit and the Native Youth Sexual Health Network in It Starts with Us – the collaboration has also produced these beautiful tributes: http://www.itstartswithus-mmiw.com/tributes

On February 14th we come together in solidarity with the women who started this vigil over 20 years ago in Vancouver’s DTES, and with the marches and rallies that will be taking place across this land. We stand in defense of our lives and to demonstrate against the complicity of the state in the ongoing genocide of Indigenous women and the impunity of state institutions and actors (police, RCMP, coroners’ offices, the courts, and an indifferent federal government) that prevents justice for all Indigenous peoples.

No More Silence began holding ceremony at police headquarters on February 14th 12 years ago. 5 years ago we formed the February 14th Organizing Committee in an effort to broaden community participation in the planning of the event – the committee is now made up of individuals and organizations including The Native Youth Sexual Health Network, Sistering, Maggies – Toronto Sex Workers Action Project and other feminist and Indigenous community organizations.