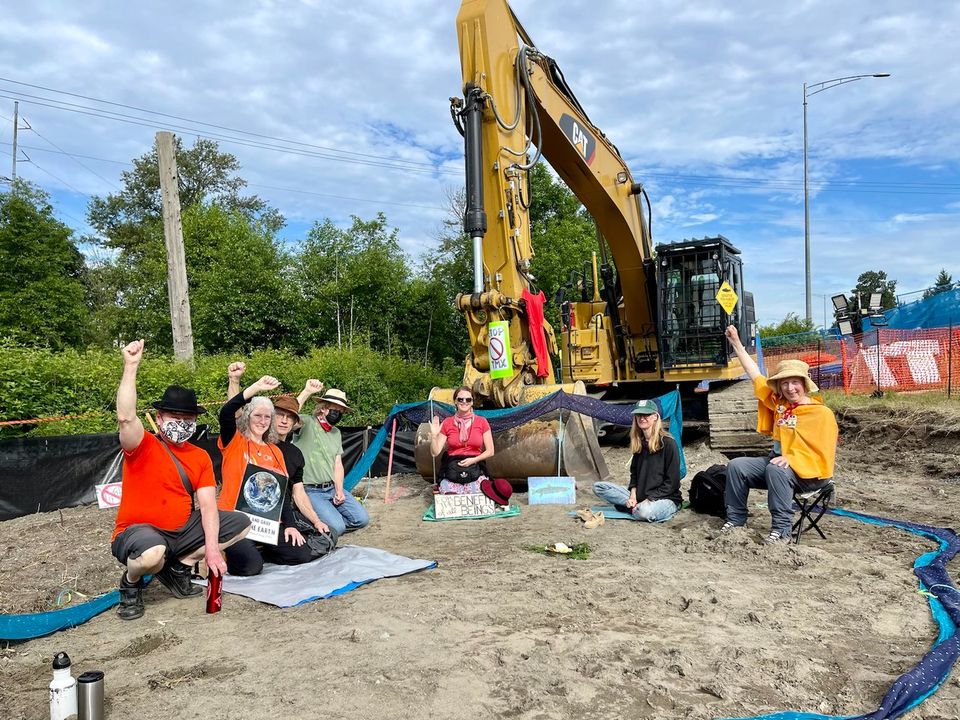 To view a live-stream of this event, visit https://www.facebook.com/StopTMX between 9-10am on Monday Feb.14th.
Support rally for the Brunette River 6, who are in BC Supreme court Feb.14 & 15, 2022 to face charges of ‘criminal contempt of court’. All 6 are facing 14-28 days in jail for peacefully stopping tree-cutting at a Trans Mountain Expansion (TMX) Pipeline work site in Burnaby in Fall of 2021. All are members of a multi-faith prayer circle associated with Protect the Planet.
They stand on the shoulders of the 240+ bold Indigenous & settler land and water defenders who have been arrested and criminalized for acting to stop the TMX fossil fuel expansion and to prevent catastrophic climate change.
Three of the Brunette River 6 are women – Catherine Hembling, Janette McIntosh, and Ruth Walmsley, who expect to be sentenced and taken into custody on Monday. Hembling will likely spend her 80th birthday, on February 23, in jail. The remaining three – Zain Haq, Bill Winder, and Tim Takaro, are scheduled to appear on the Tuesday.
Signs & banners welcome.
The Brunette River 6 stand in solidarity with the over thirty Gidimt’en water protectors who are also appearing on February 14 in BC Supreme Court in Prince George, following the RCMP invasion on Wet’suwet’en territory in November 2021. Gidimt’en Land Defenders are calling on the United Nations to conduct a field visit to Wet’suwet’en territory because Canada and BC have not withdrawn RCMP from their territory and have not suspended Coastal GasLink’s permits, despite the United Nations Committee on the Elimination of Racial Discrimination calling on them to do so.
The Brunette River 6 also stand in solidarity with those gathered on February 14 for the annual Women’s Memorial March in Vancouver, to honour and grieve the lives of missing and murdered women, and all women’s and gender-diverse peoples’ lives lost in the Downtown Eastside. In June, 2020, Canada’s National Inquiry into Missing and Murdered Indigenous Women and Girls released its final report, in which it identified a link between “man camp” environments that emerged around resource extraction projects and violence against Indigenous women and girls, as well as increased sex industry activities in those areas.
+ Google Calendar+ iCal Export