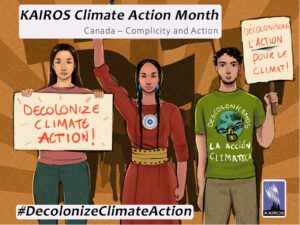 During the second week of Climate Action Month KAIROS will focus on Canadian actions that will help decolonize climate action. What Canada and Canadians do has global impacts.

As we learn more and more about the historical and current systems that drive the climate crisis and impede effective action, researchers – and even the Intergovernmental Panel on Climate Change (IPCC) – have begun to point to colonialism as one of the causes of the climate crisis. That the IPCC names colonialism (B.2) is significant because governments vet IPCC reports word by word, which makes the reports more conservative in their conclusions than the science on which they are based.

Climate Justice activists from the Global South have long made the argument that colonialism is intimately connected to the climate crisis. So have Indigenous peoples around the world and in Canada.

Colonialism is socially relevant today. It is not a geographically or historically distant phenomenon. Colonialism shapes existing relations among countries. It continues to subjugate Indigenous peoples, Africans, or others outside of European cultural heritages and ways of doing things. It has created a global economic system where the wealth extracted has created richer and poorer countries.

There are specific actions within Canada that can help reverse the climate impacts from this unjust global economic and political system. This week we focus on three Canadian bills that are  before the federal parliament. Passing these bills will be valuable steps forward toward a more just and sustainable world.

All three bills will help improve climate justice. We encourage you to join our letter writing campaign in support of them.

On Thursday, September 8, please join concerned people such as yourself at one of the two collective letter-writing sessions. Together we will write to our Members of Parliament to advocate for these bills.  The events are at Noon EST and 8:00 p.m EST. Register here.

Finally, on Friday, September 9, we will look at the moral case for a global just transition away from coal, oil and gas. Fossil fuels play a significant role in causing the climate crisis. We simply cannot burn, produce or extract more of them. Proposals for a Fossil Fuel Nonproliferation Treaty acknowledge this simple fact.

Decolonization is unsettling. Decolonizing climate action in the face of a climate emergency is imperative!

The Season of Creation

What does it take to get to climate justice?