What does it take to get climate justice? 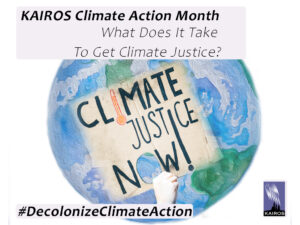 During COP22, held in Marrakech in 2016, German labour unions organized a side event called “No jobs on a dead planet.” Side events are sessions usually organized by civil society organizations that run separately from government speeches and negotiations.

The labour activists presented their “just transition” plan to protect German coal workers as the country tries to wean itself off coal by sometime between 2035 and 2050.

African activists were quick to challenge this timeframe.

One insisted: “We need you off coal by 2023 for our families’ sake!” This challenge consumed the Q&A that followed. It was clear. The German “just transition” wasn’t “climate justice” for all. The peoples of the Global South needed climate action NOW.

The evidence is clear that humanity needs to act and act very fast to prevent runaway global heating and manage the frequency and intensity of extreme weather events such as fires, heat waves, droughts, water shortages, declining agricultural productivity (that lead to famines) and climate induced displacement and migration. And let’s not forget the threats to creation-other-than-humanity.

The climate crisis is hitting regions in the Global South and Indigenous communities the hardest, even though they have contributed least to the crisis.

The countries of the world come together every year under the United Nations Framework Convention on Climate Change (UNFCCC). The 27th “Conference of the Parties” (COP 27) will be held in Egypt in November. When the world came together in Paris in 2015 (COP 21) they promised to do what was needed to keep average global temperature increase to less than 2° C – and to 1.5° C if possible. It is worth noting that parts of the world warm at different rates. For example, the Canadian Arctic is changing at four times the rate of the planetary average.

The differences between 1.5 and 2 degrees are stark. That lower goal now seems out of reach. High emission countries continue to dither and time passes quickly. The rise in carbon continues to grow and grow and grow.

According to the Paris Agreement, countries need to mitigate the climate crisis by:

The 2015 Paris Agreement was ratified by the nations of the world with astonishing speed. One year later, in Marrakech, Morocco in 2016, the agreement had come into force for all countries. But emissions have not decreased. Instead, the scientists at the Intergovernmental Panel on Climate Change (IPCC) say “Global CO2 emissions rebounded to their highest level in history in 2021.” Countries like Canada still approve new fossil fuel projects that increase global emissions. Is this fair?

At COP27, whose voices, plans and policies will get heard and implemented? Is it more likely that the German plan will become international policy, or will the African needs come to the forefront? Similarly, is a “just transition” for the Canadian population really fair for Indigenous peoples, people in the Arctic, and our partners and neighbours in the Global South? We will raise these concerns throughout Climate Action Month 2022.