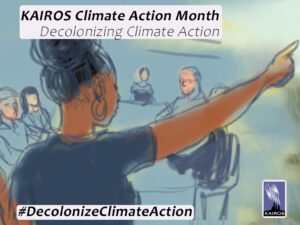 Decolonizing climate action begins with the recognition that colonialism is still active in our world. Colonialism is when one country exerts full or partial control over another country. That control could be military, political, bureaucratic, economic or the ruling ideas of the age. Racism was used as justification for colonization and ongoing colonization has justified racism, assimilation and genocide.

The forms of colonization that occurred during the age of European imperial expansion have profoundly shaped the world to this day. Many forms of injustice and inequality are associated with European colonization and have often been adopted by other countries. Colonization has shaped the ways that climate policy is negotiated and implemented, because it has shaped the power relations between nations and peoples.

High level climate policy negotiations involve limited representatives, primarily from the Global North, who cater to specific economic and technical viewpoints and interests. This leads to actions and solutions that do not meet the challenge of the crisis, further marginalize Indigenous peoples and Global South communities who are most affected by climate change and offer critical solutions, and limit investment in urgently needed adaption measures.

To decolonize climate policy means to recognize the ongoing effects of colonialism on international and Canadian climate policy, and to take action to change and reverse these effects. Decolonization is not just about wider inclusion. We will dig deeper into this during Climate Action Month.

Decolonizing climate policy is to change the deeper, systemic factors that cause ecological injustices. During Climate Action Month, we will call on supporters to advocate for the Canadian federal government to pass several private members’ bills. One bill is intended to enact a national strategy to address environmental racism and promote environmental justice. Two other bills mandate increased corporate accountability in resource extraction and call for mandatory human rights and environmental due diligence.

Another expression of decolonizing climate policy is for non-dominant forms of knowledge – such as Indigenous knowledge – to be integrated into climate policy. Privileging economic values over human rights, and a perspective that delegitimizes other creatures in God’s creation, are examples of Western colonial thinking. Ideas of racial superiority and capitalism are also outcomes of colonialism that concretely affect how we manage the climate crisis.

The structures of global power that have come down to us from colonialism also mean that certain wealthier countries – including Canada – have been advantaged in numerous ways. Securing the resources of other countries and extracting them has enabled us to live far better than other people have been able to live. It has resulted in a small set of countries and their corporations producing the lion’s share of climate emissions. These systems and consequences are also outcomes of colonialism. During Climate Action Month we will look at how these systems should change and how Canada should accept our “fair share” of responsibility. Decolonization means concrete action to right these wrongs.

During the Month, reports and readings will be posted on the resource page. New material will be revealed weekly. Online events will happen throughout the month. We will ask you to act in support of global and climate justice. We will also ask you to rethink some of your own assumptions, including those related to Christian faith. The links between Christianity and colonialism need to be addressed in order to decolonize the efforts of the church in its work and advocacy in caring for creation in a just and fair way.

Decolonization will not happen if we rely on the familiar, comfortable, and business-as-usual. This has only led us further down the path of growing crises of climate and ecological injustice. It’s time to make a difference by doing something different. Decolonize climate policy!