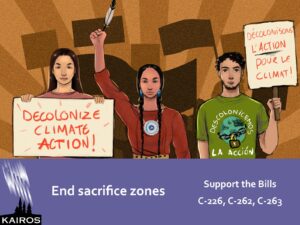 The climate crisis and environmental degradation are taking their toll on communities worldwide. But some communities are impacted more than others.

For decades, polluting industries and landfill sites have ended up in Indigenous, Black, Brown and other racialized communities in Canada, burdening these communities with higher-than-normal rates of cancer, respiratory illnesses, and other chronic health problems.

If Canada wants to live up to its reputation as a human rights defender and a just transition champion, it must end environmental racism at home and abroad once and for all.

A transition to a greener and more sustainable and just economy is both a process and a vision. It will be challenging to shift from an extractive economy to a regenerative one. The process not only involves supporting workers and communities who rely on the income from the fossil fuel industry, it involves addressing environmental racism, redressing past harms, shifting economic and political power, and upholding Indigenous rights and sovereignty. These are requirements for a transition with justice for workers, all peoples and the environment. After all, it is ultimately about transforming our relationship with the Earth and with each other.

Three private members bills, if enacted, will be powerful tools in the just transition process.

Write to your MP today!

Bill C-226: An Act respecting the development of a national strategy to assess, prevent and address environmental racism and to advance environmental justice.

If enacted this bill would task the Minister of Environment and Climate Change to develop a strategy that must include measures to examine the links between race, socio-economic status and environmental risk.

In February 2022, Elizabeth May (MP for Saanich-Gulf Islands) tabled the bill, which passed second reading in June. The Minister of Environment and Climate Change stated in the House of Commons that the government supports this bill. Ms. May provides details and background information on the bill, including examples of environmental racism on her webpage.

The Standing Committee on Environment and Sustainable Development cleared the bill without amendment on November 14. The environmental racism bill’s next step, after the post-committee report stage (beginning February 3, 2023), is third reading and final vote in the House of Commons.

The bill is based on another private member’s bill (C-230), sponsored by Lenore Zann (MP for Cumberland—Colchester) and studied in the last Parliament. It died on the order paper when the election was called.

For nearly two decades civil society, labour unions, and religious groups—including KAIROS, member churches and network members— have called on the government to take action on reports of systemic human rights abuse and environmental damage linked to Canadian oil, gas and mining projects around the globe.

These are clear human rights abuses, committed under the watch of resource extraction companies worldwide, more than half of which are headquartered in Canada. For this reason, the Canadian Ombudsperson for Responsible Enterprise (CORE) was created in 2018, but, despite promises, without powers to compel documents or, in other words, without legal mechanisms to make companies accountable

In June 2021, enacting human rights and due diligence (mHREDD) law and an empowered CORE were recommended by Canada’s Subcommittee on International Human Rights of the Standing Committee on Foreign Affairs and International Development.

With Bill C-262, Canada would adopt mandatory human rights and environmental due diligence legislation. Companies would be required to identify and prevent human rights abuses and environmental harm, report any violations, and face significant consequences for violations. In addition, there is a provision in the bill that would make it easier for impacted communities to access remedy through Canadian courts. This legislation would apply to Canada-based companies abroad and transnational companies operating in Canada as well as their business partners—subsidiaries and supply chains.

Bill C-263: An Act to establish the Office of the Commissioner for Responsible Business Conduct Abroad and to make consequential amendments to other Acts

The passage of Bill C-263 would empower the Canadian Ombudsperson for Responsible Enterprise (CORE). Bill C-263 would grant the Ombudsperson the investigatory powers that were revoked from the office’s initial mandate. In its current form, the Ombudsperson’s mandate is limited to mediation services to Canada-based companies and communities—and only after an allegation passes the CORE’s requirements of credibility. The CORE deals with matters concerning the mining, oil and gas, and garment sectors.

Please urge your MP to support these three bills.

Write to your MP today!

The Canadian Coalition for Environmental and Climate Justice

A broad spectrum of groups urges Parliament to expedite passage of Canada’s first environmental racism bill, ahead of the House of Commons debate

There’s Something In The Water: Environmental Racism in Indigenous & Black Communities, by Ingrid R. G. Waldron

Testimonio: Canadian Mining in the Aftermath of Genocides in Guatemala, Between the Lines