Together with global partners on the brink of radical change #KAIROS20 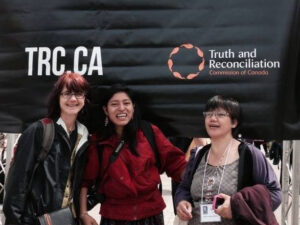 Left to right: Rachel Warden, Anny Matriz from Guatemala and Vernie Diano from the Philippines at TRC final gathering, 2014.

Left to right: Rachel Warden, Anny Matriz from Guatemala and Vernie Diano from the Philippines at TRC final gathering, 2014.

20 years of KAIROS. For me, that is 20 +7 years (with Canadian Council of Churches and then former ecumenical coalition InterChurch Action) of work with partners, mostly in Latin America but more recently in other parts of the world. Some of these partners are the same as 20 years ago. Strong relationships and allyships have developed. These partners have grounded and informed the work of KAIROS and the work of the ecumenical coalitions before that. They have also anchored me. The strong friendships that have ensued have enriched my life. I wouldn’t want to be anywhere else.

We are told that this is an unprecedented time, a kairos time, fitting for the 20th anniversary. And it is. The pandemic has exposed and magnified historic and systemic injustices and inequities that partners have faced for a long time. Now, these are suddenly more evident to all of us. The pandemic has also shown the capacities of government and societies to respond. It is an opportunity, a kairos moment, to tip the arc of time towards justice. Yet, currently it seems we are sliding backwards towards greater inequities, injustice and greed. Can this be a kairos moment when a tiny fraction of the poor world has access to vaccines?

We have faced many kairos moments before. In my work with partners, it feels like it is a kairos time, a historic time – all the time. In fact, this became a joke with Colombian partners. I remember, I was in Colombia in 2008 when over 30 members of the Colombian Congress and Senate were being charged with colluding with paramilitaries in the “para-politics scandal”. This was after human rights partners had been denouncing these ties for years. I turned to partners at a demonstration of the Movement of Victims of State Crimes and said, “Wow! This a historic moment!” Lilia Solano from Justicia y Vida and Omar Fernandez from the Franciscans just looked at me and said: “Querida, it’s always a historic moment in Colombia. This is our life,” After that, Lilia and Omar would greet me and say, “Rachel’s here, it must be a historic moment.” They would say this affectionately, but the message was clear. Justice work is a series of kairos moments, defined by those experiencing injustices. I didn’t have to be there or experience it for it to be a kairos moment.

I have learned so much from these 20 years +7 working with partners, but perhaps most importantly, I have learned that our work at KAIROS has been strongest and most effective when it has been led by partners. There are so many examples of this. Here are just four:

In 2005, our human rights partner in Mexico, CentroProdH told us that it was imperative that our delegation of Canadian church leaders, focused on economic justice, visit Cerro de San Pedro, San Luis Potosi, a community that was protesting a Canadian mining company. So, Rusa Jeremic and I took the entire delegation to meet with the community and a broad coalition of groups that opposed the mine. We were told that we were the first Canadians not associated with the mining company to visit them. In the town, Canadian church leaders faced graffiti that read – “Pernicious Canadians, go home!”, because Canadians were associated with a mining company that was threatening their land, livelihood and lives. This led to years of advocacy in support of the community’s legal struggle against the mining company. The community kept winning the legal battles, but the company went ahead with the open pit mine with impunity.  Today, the community has been decimated and divided and the nearby mountain (Cerro) which appeared on their coat of arms has been flattened. Although we did not win this case, this experience and direction from partners strengthened our resolve and our advocacy on mining justice.

In 2010, we responded to an invitation from the Organización Femenina Popular to participate in the International Mobilization of Women against Militarization. We organized a delegation of women, including Indigenous partners from Canada, and migrant justice and global partners to Colombia.  We visited Indigenous and Afro-Colombian communities impacted by the war and militarization and accompanied community members in bus caravans to Barrancabermeja to participate in the mobilization and vigil at a military base. At the end, we held a workshop with partners on the gendered impacts of militarization and war and the use of international human rights frameworks and resolutions (including the UNSCR1253 on women peace and security) to defend women’s rights and build sustainable peace. After many years of gender justice work, I see this as the birth of the Women of Courage program and our work with partners on Women, Peace and Security.

In 2013, Natalia Atz Sunuc, a Maya Kaqchikel woman, a human rights defender and survivor of the genocide in Guatemala, was invited to be an honorary witness at the National event of Truth and Reconciliation Commission in BC. For years global partners had called on Canadian church leaders and delegates to participate in human rights tribunals and truth commissions in Latin America and other parts of the world. During the TRC, Indigenous leaders and survivors of Residential Schools in Canada were calling for international witnesses to accompany and bear witness to this important human rights process. Naty’s witness statements informed the TRC and strengthened direct allyship and solidarity. It resulted in visits and exchanges between Indigenous youth in Canada and Guatemala and eventually the development of a Guatemalan KAIROS Blanket Exercise by Guatemalan partners.

In May 2013, I met Maliseet grandmother Alma Brooks for the first time at the Wabanaki water convergence ceremony which took place where the waters of the Saint John River (WOLASTOQ) converge with the tide’s end. After the fasting and the ceremony, we went out for hot turkey sandwiches and Alma told me that we had to organize a delegation of Indigenous women to the UN Permanent Forum on Indigenous Issues (UNFPII) to call attention to the impacts of resource extraction on water, the land and on Indigenous communities, particularly on Indigenous women. It was a compelling demand and we heeded it (you just don’t say no to Alma). The next year, we organized a delegation of Indigenous women from Canada and Central America to the UNPFII. I see Alma as one of the catalysts and instigators of KAIROS’ Women of Courage work on the gendered impacts of resources extraction and eventually the MERE Hub, Mother Earth and Resource Extraction: Women defending land and water, digital hub. Alma remains involved in this work.

These are just four examples of many, from my perspective and work with partners, where partners have led our advocacy direction and initiatives. As we navigate the current kairos time/ moment, we need to continue to take direction and be steered by these partnerships.

It is a kairos time, but there have been many KAIROS times in our 20 years, and we have been at our best in responding to these times when have taken heed from partners and impacted communities. This KAIROS time feels particularly prescient because we are all feeling it and have been exposed to it, in one way or another. We are not at all in the same boat; in fact, the boats or vessels are becoming increasingly unequal, but it has shone an x-ray on inequities and injustices.

It feels like we are at a tipping point, at the brink of the radical change needed to finally address these inequities, or at risk of sliding back to even greater inequities, humanitarian crisis and destruction of the planet. I guess my plea for KAIROS now and in its years to come is that we continue to let partners steer us in a good way, in a direction towards justice for all peoples and for the planet.