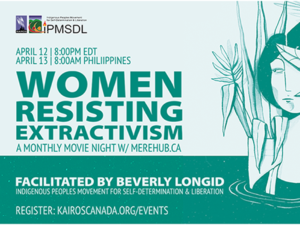 Join KAIROS’ MERE Hub on Monday, April 12th at 8:00pm EDT (8:00am Tuesday, April 13 in the Philippines) for the third installment of its virtual film club on the gendered impacts of resource extraction.

This third session will be hosted by Beverly Longid of international Indigenous Peoples Movement for Self-Determination & Liberation (IPMSDL). IPMSDL have chosen the documentary “Ground Zero.” The film night’s focus will be on the Philippines and Indigenous women’s leadership, food sovereignty, and the impacts of dam projects. Bev Longid was part of the KAIROS delegation to the International Gathering of Women Resisting Extractivism in Montreal in 2018.

The Women Resisting Extractivism Film Club highlights the leadership of women land and water defenders and attempt to create a generative online space for participants to come together, learn, and build community. Each of the sessions will be planned, led, and facilitated by a land defender or ally.

The first two sessions, held on February 16 and March 16, were successful events. The first session was hosted by Connor Sarazin who selected the film “As Long as the Waters Flow.” Nancy Fuentes (Grufides, Peru) and Miriam Garcia (ADES, El Salvador), members of the Latin American Network of Women Defenders of Social and Environmental Rights chose the documentary “No Tenemos Miedo” (“We Are Not Afraid”). They invited Vidalina Morales (ADES, El Salvador).