“We have observed that where women have engaged in peace initiatives alongside men, things have changed for the better. Women are not only victims of violence, but also the best and most tireless artisans of peace. When there is peace, inclusive, just and sustainable development becomes possible.”

Chantal Bilulu is an advocate for the power of women in creating lasting peace. Despite living through war after war in the Democratic Republic of Congo, she is hopeful that someday, her country will be one in which peace exists and women’s rights are promoted, protected, and defended.

In the Democratic Republic of the Congo (DRC), women and girls face sexual violence as a weapon of war. Between the First and Second Congo War and violence related to resource extraction, the country has been a conflict zone for decades. Over 4.3 million people have been internally displaced as a result of war, the greatest number in Africa. Women are not only affected by trauma related to losing family members to war, but also suffer in silence as survivors of sexual violence. Patriarchal attitudes limit women’s participation in politics and decision-making in their households.

KAIROS’ partner, Héritiers de la Justice (HJ), works to diffuse violence and lay the groundwork for lasting peace in the country. Through its legal clinics, it provides legal training, information, and mediation to promote peace and justice in the eastern region of DRC, particularly in the South Kivu province in the African Great Lakes Region. Héritiers de la Justice’s team of women’s rights advocates, lawyers, and paralegals endeavor to bring justice for women survivors of war. They document cases of sexual violence, accompany women through the judicial process, and educate them on Congolese and international laws that protect their rights. The organization also advocates for the government to make policy changes to protect women and children.

HJ organizes trainings for women to become paralegals in order to create a ripple effect of empowered women defending their rights. It also works to establish and support local women’s committees across the country for women to support each other and break their silence around sexual violence.

“These clinics have helped thousands of women in the DRC,” said Chantal during a visit to Canada. “As a result, women’s rights are widely understood by women themselves and the population at large. Women can see their rights are being promoted, protected and defended.”

Global Affairs Canada’s recent announcement of $4.5 million over five years to five of KAIROS’ grassroots partners in the Global South, including Héritiers de la Justice, signals the importance of women-led peace building. Donors who choose to designate the much-needed matching funds will be sending a global message that women’s voices matter, and can create lasting change.

For peace building and women’s empowerment to be truly lasting, grassroots citizen-led groups must be at the forefront of development. With this new federal funding, Héritiers de la Justice will expand its capacity to provide legal and judicial support to women facing human rights violations. The organization will also focus on strengthening women’s knowledge and leadership with respect to human rights and peace processes. 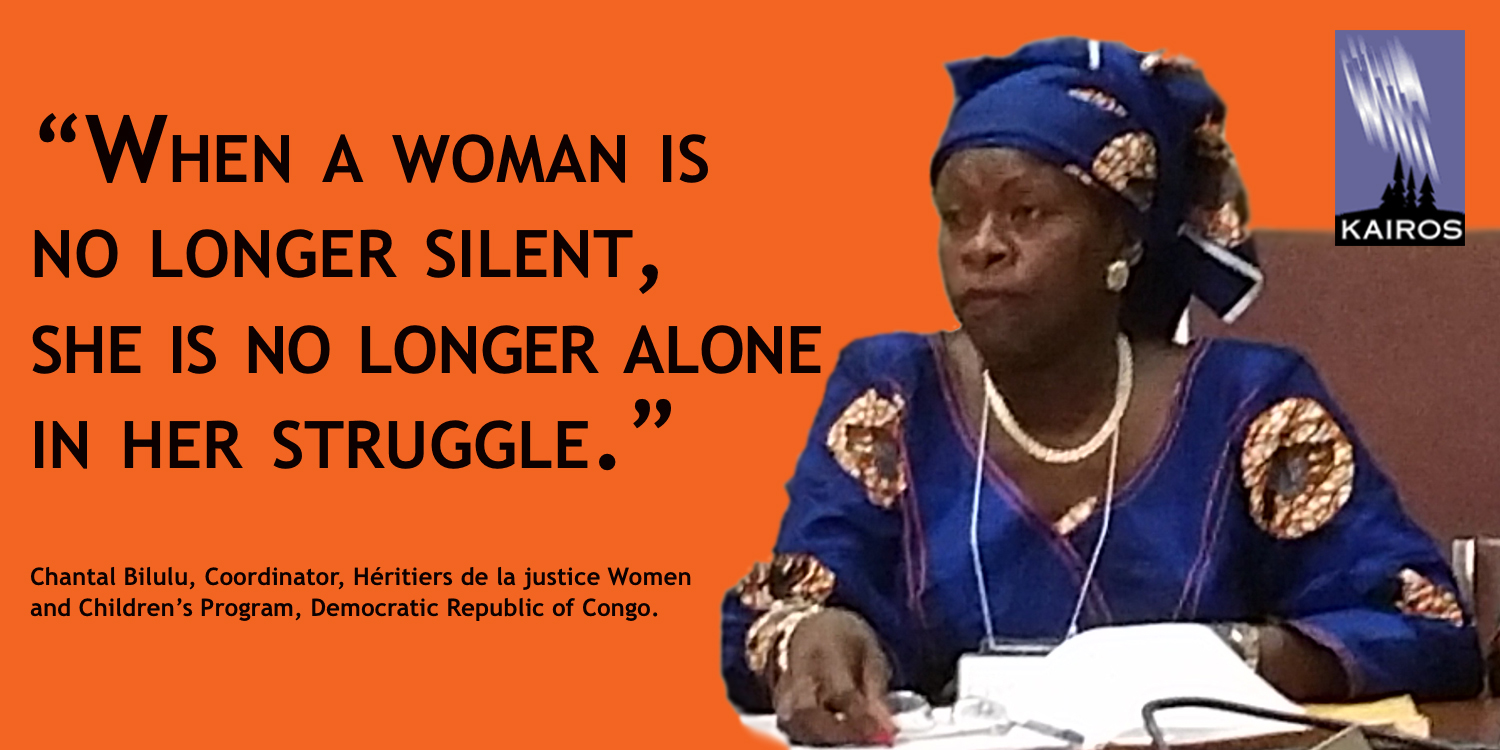 For every $1 you donate, our partners will get $4