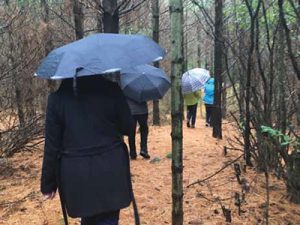 Nibi, Gizaagi-igo
Water, we love you

When I first learned the Anishinaabe Water Song, I realized that I had never expressed those sentiments to water in that way; as if I was talking to another being, a friend or a relative.  The words are simple, but they convey a powerful relational connection.

In Canada we tend to take our relationship with water for granted.  We believe, incorrectly, in its abundance.  We are told that our natural resources are our country’s greatest strength and that freshwater is a resource to be managed and sold to keep the economy strong.  But by regarding water solely as a resource or commodity, we forget its sacred properties and distance ourselves from water and the watersheds that sustain us.

Wherever we live, we are part of a watershed.  However, our identity is typically not shaped by that geographic area.  We identify ourselves by political boundaries – a municipality, province, or territory – which bear no resemblance to the natural flow of water across the land.  In some cases, political boundaries have been drawn right down the middle of rivers or lakes, separating communities supported by that body of water from one another.  These political boundaries were imposed on the landscape by colonial powers that ignored watershed boundaries and the way of life of Indigenous peoples.  When maps were first drawn by colonial powers they erased Indigenous presence from the land by removing Indigenous place names and with them the knowledge of the land and water in those names.

Indigenous peoples were the first watershed protectors and in many Indigenous teachings water is considered spirit and a relative.  At the heart of reconciliation is decolonization, a re-centering of Indigenous perspectives in all areas of society, including the environment.  Activist Syed Hussan says, “Decolonization is a dramatic re-imagining of relationships with land, people and the state. Much of this requires study, it requires conversation, it is a practice, it is an unlearning.”

To Cowessess First Nation Member, Dodie Ferguson, “decolonizing the watershed” extends beyond the colonial structures that created First Nations in Canada. Indigenous people recognize that all manners of life rely on water and that its security is part of the interconnected and cyclical world we inhabit. Ferguson emphasizes an often-repeated Indigenous concept: our present-day use of water resources is a mere point in time.  We should always keep the security of current resources in mind not for our present-day use but for that of future generations on the land we call Turtle Island (North America). Treat the spirit of the land and water with respect and it will continue to support and care for us.

This process of unlearning is the focus of KAIROS Canada’s Reconciliation in the Watershed program. As part of this program, a series of workshops were held across the country this fall.  Hosted by local partners and Indigenous leaders, the workshops invited participants to explore ideas of decolonization and learn about their watershed. Through ceremony and discussion led by Indigenous women, participants were introduced to Indigenous perspectives on water and the environment.

At the beginning of the workshop, participants were invited to examine a series of maps of Canada and North America. One map shows political boundaries, another the five oceanic watersheds of Canada, another over-lapping territories of Indigenous peoples, and so on.  The maps are intended to shift our perspective and reveal different ways of understanding the place we call home – an essential step for decolonization.

As watersheds in Canada continue to be threatened by resource extraction, pipeline development, industrial pollution, agricultural activity, climate change, and more, the need for collective learning and action is critical.  In the coming year, KAIROS Canada will continue to facilitate these conversations across the country, bringing together Indigenous voices with those who are concerned about watersheds and all the life they support. Water is the ultimate connector, as educator Denise Nadeau asserts.  “It connects us to specific places, people and creatures we have not seen, life that is far away from us and life that came long before us.”  We each have a responsibility to honour that connection and become better relatives of water.

Dodie Ferguson was raised on Cowessess First Nation in the Qu’appelle river watershed of Southeastern Saskatchewan within a strong, intergenerational agricultural family. She is a member of the Cowessess First Nation Lands & resources committee and an active member of the Canadian Union of Postal Workers (CUPW), currently serving on CUPW’s National Human Rights Committee and as a facilitator of labour education programs in the Prairie Region.