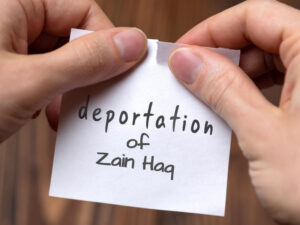 Stop The Deportation Of Zain Haq

Stop The Deportation Of Zain Haq

Join those who are urging  Canada’s Minister of Citizenship, Immigration and Refugees, Sean Fraser, and Prime Minister Justin Trudeau, to immediately suspend and revoke deportation proceedings against Zain Haq.

Zain is “a known and respected peaceful activist in our midst, and a person I’ve gotten to know personally and deeply respect and care for as one of the ‘Brunette River Six,’” says Janette McIntosh, Presbyterian, long-time KAIROS volunteer, and current regional representative for KAIROS BC-Yukon. KAIROS supported the six activists earlier this year when they faced repercussions for their non-violent actions for a livable climate.

This case highlights the interconnected injustices of the climate emergency, a lack of corporate accountability, and a lack of rights for migrants. Zain Haq, who hails from Pakistan, is studying at Simon Fraser University on a Canadian study permit. This permit has been revoked ostensibly due to his climate activism.

Please sign this open letter in support of Zain. Or better yet, write your own letter to your Member of Parliament asking them to contact Minister Fraser or write to Minister Fraser and the Prime Minister directly.

Zain has witnessed the devastation that climate change has wreaked on his home country, Pakistan. Business as usual is not going to win us a livable world. Zain is a leader in non-violently disrupting the status quo. While in Canada, he has been instrumental in several climate movements such as establishing Save Old Growth and a campaign to push his university to divest from fossil fuels. Let our government know that we want this international student to complete his studies, to use his voice for good, and to enjoy civil liberties in Canada.

In solidarity, The KAIROS Team