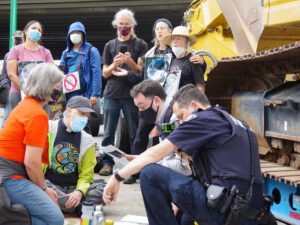 Join KAIROS in rallying in support of the Brunette River 6.

All of them belong to a long-standing multi-faith prayer circle called Prayer Circle Direct Action Group, associated with Protect the Planet.

One will likely spend her 80th birthday in jail.

Their sentencing takes place on February 14 and 15. To learn more, read their op-ed printed in the February 10 issue of the Vancouver Sun:  Why we face jail time for safeguarding a livable climate.

You can support them in several ways:

Write a brief letter (150 words max) to the Vancouver Sun in response to the group’s op-ed. To assist you, read KAIROS’ Letters-to-the-Editor Tips. The more people who submit letters, the greater the chance that at least one will be printed. Submit your letter to sunletters@vancouversun.com.

Join in person or Facebook livestream, Monday, February 14, 9:00-10:00 a.m. PST. The Rally will be held at the B.C. Supreme Court (corner of Hornby & Nelson) in support of the Brunette River 6. RSVP & share Facebook Event. View Livestream on February 14 starting at 9:00 a.m. PST. This event takes place on the unceded territories of the Coast Salish Peoples.

Write to your Member of Parliament

Write to your Member of Parliament in support of cancelling the Trans Mountain Expansion Pipeline.

Resources to assist you:

Mail letters of solidarity and support to the Brunette River 6

Let’s flood the correctional centres with messages of solidarity and support for those who have put their bodies on the line for a livable climate.

Letters will need to arrive by February 21 or 22.

Letters to the women

Letters to the men

Thank you for your support!