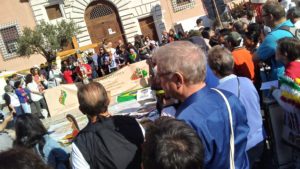 Words have power. We daily witness this power, both for good and for harm – for life and for death. Words can also communicate a shift in approach and a new vision such as those presented in Laudato Si’ as well as elsewhere in the writings of Pope Francis.

He and others challenge us to think of this earth as our “common home”: our ‘Casa Comûn,’ calling for an understanding of the interconnectedness of all creation.  This vision helps us to see more clearly that the cries and screams of pain of our Mother Earth and of her poorest children are one – and the same— that is, intimately and ultimately connected.

He challenges us to recognize that the destructive and indifferent human behaviour that ravages, plunders and rapes the only planetary home we have is in fact, “ecological sin.”  The Cree People in Western Canada have long understood this concept. They differentiate between doing harm (sinning) toward our human neighbour and wilful damage or destruction (sinning) to the rest of created life. They use two distinct words, according to Cree Elder and leader, Harry Lafond.

Can we listen deeply enough to the words “ecological sin” to move us to a radically new way of treating our earth mother and her children?

In 2018, preparing for the Synod for the Amazon, Pope Francis said:

“The Synod of Bishops must increasingly become a privileged instrument for listening to the People of God: ‘For the Synod Fathers we ask the Holy Spirit first of all for the gift of listening: to listen to God, that with him we may hear the cry of the people; to listen to the people until breathing in the desire to which God calls us.”[1]

I see a shift and new approach as the leadership of the Roman Catholic Church seeks to engage in quality and depth of listening to the voices, the concerns, the suffering and the needs of the people –not as an exercise in consultation, but as a way of taking to heart their deepest desires and recognizing those desires as radically communicating God’s desire. It involves truly hearing violated and marginalized peoples’ longings for life to the fullest for themselves, for their land, their water and all life in their biome; for their safety; and for future generations.

As a participant in the Jesuit-sponsored North American delegation to the symposium Tienda de la Casa Comûn, I witnessed this kind of listening and speaking: a warm, open, and genuine dialogue. The symposium gathered Indigenous and other Amazonian lay people, clergy and religious as well as people from around the globe, including peoples of other Christian churches and other faith traditions.

The Catholic Church Network in Amazonia organized extensive dialogues and consultations, the fruits of which formed the working document used by the Synod participants and invited guests. Development and Peace, a member of KAIROS, also engaged in dialogues with their partner organizations in several Amazonian countries.  Such a dialogue of encounter is also the dream and vision of Pope Francis for all humanity.

I was especially moved by the warmth and love communicated by Casa Comûn delegates as they stood near the entrance to the synod hall, greeting bishops, archbishops, Indigenous Amazonians and others with joy, with the promise of support, solidarity and prayers as they began their day of intense listening and deliberation.  Father Fernando Lopez, SJ, a member of an itinerant team ministering to migrants and Indigenous Peoples in Voluntary Isolation eagerly introduced us to almost every Synod participant who walked by us, telling them we were in solidarity with them.

I believe that words also communicate spirit.  The suffering, courage, strength and faith of the Amazonia people present were visible, almost tangible.   We listened to Doña Zenilda sharing her story. After the murder of her husband, she became spiritual leader of her people in northeastern Brazil, fighting for their land and their rights.  As she finished speaking, she spontaneously prayed and sang a hymn to Our Lady, their patroness. She inspires me!

In the face of all that the participants are suffering, there is a spirit of joy and irrepressible hope that is rooted in their faith, in their trust in an imminent and engaged God, in their sense of community and their intimate connection to the life of their land and waters.

As Christians, we are familiar with Jesus’ Way of the Cross.  On Sunday morning we walked the Way as lived in Amazonia.  At every station, the Amazonians laid banners of many who have given their lives –martyrs for the land and the people of the land. Among them are Indigenous leaders, clergy, and religious including Sister Dorothy Stang. Archbishop Oscar Romero’s image highlighted a sense of solidarity and interconnection beyond the Amazon. From start to finish, Amazonian delegates carried a large canoe, a fishing net and a wooden image of Pachamama  (a pregnant Mother Earth) to each station, laying banners and maps of Amazonia around it. Others took turns carrying a huge wooden cross.

We walked, prayed, sang and listened to Scripture. Each time, someone nailed a small picture of one of the martyrs and a symbol to the cross— for us, the North American delegation, a medicine wheel. At the fourteenth station, delegates dressed in white lay down on the pavement in front of the cross, representing those who were killed and those willing to die in the struggle in Amazonia.

Then, a remarkable symbol of resurrection took place before us!  As Indigenous Amazonians removed the images of Pachamama from the canoe, they painted the face of a young girl and offered a wreath of green leaves for her head. Then they put her into the canoe, raised her up and danced in a circle.  Her life was in their hands, just as the life of Amazonia is in our hands. This for me was a proclamation of the word of life.

I may too easily forget the words spoken in our many precious encounters in Rome, but I pray that I will never forget the power, the vision, the desires and the spirit that the words communicated.  I felt the breath and saw the face of Christ in the faces of my brothers and sisters of Amazonia.

As we move into the Advent season, we recall the great moment in human history when, as John says: “The Word was made flesh, he lived among us.”[2]  The living Word of God, Jesus, the Christ, is the most powerful word of love ever spoken. May we recognize this same love expressed in the words spoken – and not yet spoken – for the life of Pachamama and her beloved ones.  May those words inspire and move us to acts of solidarity with the Amazonian Peoples for the protection of our common home. They are counting on us!

Priscilla Solomon, CSJ, is an Ojibway Sister of St. Joseph of Sault Ste. Marie. She works in their Faith and Justice Office, focusing on Reconciliation between Indigenous Peoples and Peoples of Settler and Immigrant Origins.  She was a member of the KAIROS Indigenous Rights Circle from 2011 until 2018.