Spirited Reflection: Message on the Amazon from Rome 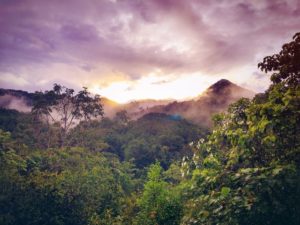 “Return now to the place where God has given you responsibility. Remember the peace and love we have celebrated. And do not fail to show, to all people, the new life that is already among us.” Blessing, Michael Ingham, Bishop Emeritus, New Westminster

The bonds of love sink and lift up, somehow becoming unbreakable, across language, culture, time and distance. We prepare for our departure, sitting on the steps of Santa Maria Traspontina as the sun sinks down golden over St. Peter’s in Rome.

I can’t bear to leave. I want to sneak away but that wouldn’t be right, so I start to say goodbye to my Brazilian friends in my terrible Portuguese. One by one people hug me, Luiz, Irma, Inez, . .. Along the other side of the wide steps the birimbao is gently twanging. I go over to that side and now the tears are lining up inside my eyes. This group is bunched around a Brazilian Bishop, all talking excitedly, arms waving. I don’t want to interrupt, so I sneak past. But Agostinho puts down the birimbao and pulls me in for a hug. And Edna hugs me too: she, together with Pope Francis, planted that oak tree in the garden of the Vatican.

Then there’s Francisco. Over the days we got closer and closer. I teased him that Pope Francis had borrowed his name. We snapped selfies together, and then in the deepest moment of connection, right in the transept of Traspontina he took off his feathered crown and fitted it on my head. That was it. Friends for the rest of our life. He invited me to visit him: 48 hours by boat from Manaus, Brazil. I hope I will go one day.

The great Brazilian liberation prophet, poet and bishop Pedro Casaldaglia said: “At the end of the road they’ll ask me: have you lived? Have you loved? And I, without saying a word, will open my heart, overflowing with names.”

At last I break away and stumble down along the banks of the Tiber. I am probably not the first woman to wander these banks in tears – in my case with a heart broken over another river—the spectacular, threatened Amazon. Didn’t each one of us fall in love with the Amazon when we first learned about it? Its vastness, its power, the jungle thronging along its uncountable fingers, filled with colour and life? Didn’t our hearts all shatter when we heard about the fires this past August? Did you see the photo of the anteater dead in the ashes?

This meeting is about the Amazon Region, but it is about much more. Where else have humans come, conquered and destroyed? The tar sands in Canada, the dreadful Site C and Muskrat Falls massive hydroelectric dams, the pipelines, the mining disasters in our country. Above all, Canadians, we have to take responsibility for the 60 per cent or so of international mining companies that are registered in our country. Wherever I go, whenever I speak up – including in these activities in Rome – I have first to apologize to the people from all the countries represented: for in Brazil, Colombia, Ecuador, Argentina, Peru, all over Latin America, Africa, all over Asia, Canadian mining companies are ravaging the world. Our pension plans are almost universally invested in these companies – even from our churches, which cling to a cold idea of fiduciary responsibility, as if that mattered more than life itself. Notice it next time you see a play, an opera, a concert, a film. Notice that our lives have been sponsored by Goldcorp, by Barrick Gold.

The Amazon –the whole world – has been turned into a thing to be bought and sold, packaged and used and thrown out. The predators must be stopped. There are people who remember that the whole Earth is holy, and everything that lives and moves and has its being on earth is holy. Wherever we come from, whatever tradition –now is the time to stand up.

This meeting in Rome will be a fulcrum, a before and an after in the life of the world. At the heart of this gathering is a determination to be church – and world – differently. So I leave, carrying with me this message, this promise, and this question: how does change happen?

Fr. Eleazar Lopez, Zapotec theologian, was a founder, in the 1970s of Teologia-India, a fully enculturated understanding and expression of original peoples’ faith within the broader Liberation Theology Movement. He says:

The Christian story does not belong to Europe, or to European descendants who settled in stolen and violated lands around the world. These conquistadores and most of the later settlers brought with them a wrong idea of what it meant to be a member of the community that follows Jesus. There are many still who cling to an old, stale – even dangerous – idea of Christianity. One that spits on everyone else and demands that it alone is right. What is happening in the very beating heart of Rome is that the church is being invited to returning to whom it was always meant to be.

The power of the church is immense. God knows it is faulted, and sinful and has hurt millions. But it also contains those grains of hope and right-living that live within all creation. Those seeds are being watered. On Sunday, October 20th, in the Catacombs of Domitilla, a new “Pact of the Catacombs” was signed. The original Pact, signed in 1965, committed to a renewed path of humility and justice-seeking, and formed the foundation of liberation theology which swept across Latin America and beyond for decades.

The church in the 1970s and thereafter shrank back into itself and forgot this promise. And thousands upon thousands of Christian leaders – lay and clergy – in countries up and down Abya Yala were abandoned by the church and then murdered by the powerful – including most of the 250, 000 people who died in the Guatemalan genocide.

This renewal of the Pact of the Catacombs is a sign. The Pact focuses on a commitment to becoming co-creators of this new world, on the primacy of living an Integrated Ecology, and on honouring the guardians who have preserved the truth that all creation is holy. The whole world will be invited to take this new pact to heart and make vows to adhere to it.

Let’s work, let’s organize, let’s rebel against the death machines of this generation!

“Have courage. Hold on to what is good. Return no one evil for evil. Strengthen those who fail. Support the weak, and honour all life.”

The Reverend Emilie Teresa Smith is the Parish Priest at St. Barnabas in New Westminster, BC. Born in Argentina, raised in Canada, she has spent 30 years working with the people of Guatemala. Since 2012, she has been the co-President of the historic Oscar Romero Solidarity Network (SICSAL). With a radical commitment to practicing Christian love in community and challenging systematic injustices that destroy the Earth and its creatures, Emilie has also produced a collection of her passionate writings, Mattering the World with Holiness, walking with land defenders in Guatemala, Colombia and Canada.