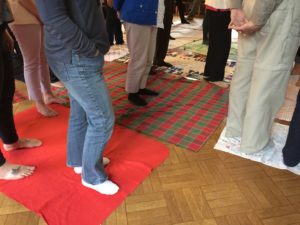 Recently, I was fortunate to witness the Guatemalan expression of the KAIROS Blanket Exercise while in Toronto, Ontario. As a First Nations woman, I was struck by the similarities of this story of colonization to the one I had come to know as an intergenerational Residential School survivor. Though I was previously unaware of this history, it wasn’t difficult to see why colonization was so successfully entrenched in our distinct societies.

Not long ago, the hosts of the Indspire Awards show of 2018 played a comedy skit where colonization hadn’t occurred. The hosts found themselves in an alternate reality, on Haudenosaunee territory, surrounded by fluent Mohawk speakers who couldn’t fathom a world where Mohawk and other traditional languages weren’t practiced. “So, everyone just speaks English?” They ask, shocked.

Impressed by the fortitude of our Guatemalan teachers, I, too, soon found myself imagining an existence where our traditional cultures and knowledge systems had been preserved, rather than annihilated.

Matriarchs were/are the backbone of society.

Colonization was made successful by subjugating the traditional role of women. Women were considered powerful, across all nations, for their ability to conduct the ceremonies of life giving and care giving. Men in our societies recognized a woman’s strength and respected the ability to nurture growth and survival through pain and danger. Children learned to respect their Elders and to rely on the safety of their communities, orchestrated by the family matriarchs.

One cannot help but reflect on how much safer our current world might be. If matriarchs had maintained their roles as community managers of justice and well-being, would present day society be struggling to cope with unprecedented levels of domestic violence? Intimate partner violence? Would human trafficking have ever gained the momentum it has now? Would MMIWG even be a widely recognized acronym in society?

In balance with the land.

Our ancestors knew the importance of balance and conservation in our relationship with the sky, the water, the land, the plantkin, tree spirits, the two and four-legged, the winged, the swimmers, and the crawlers.

During a quick span of days that has had the Canadian government acknowledge systemic genocide against MMIWG, then sabotages reconciliation by obstructing a bill that ratifies the UN Declaration of Indigenous Rights, then successfully maneuvers Indigenous Rights to commit further genocide through environmental abuses, it is easy to feel overwhelmed and discouraged.

One of the more disturbing reports that have come out about the mistreatment of Indigenous people included the revelation that many children were used as subjects for experimental research related to diet, vitamins and the effects of deficiencies, to name a few of the initiatives.

The research hypothesis was developed during the Great Depression, when Indian Agents were apprehending children for the Residential Schools. The Agents and School officials couldn’t believe how

healthy the First Nations, Inuit, and Métis children appeared, despite the extreme food rationings that had rendered non-Indigenous children from the local farms and towns malnourished and in poor health. The perceived limited means of the local Indigenous people, who were living on the land as they had done successfully for generations, were a contradiction to what the Settlers understood and rather than learning from these families, they separated and essentially traumatized the children.

If Indigenous values had been adopted by Settlers, rather than vilified and dissected, we would likely be living in a world without climate crisis, without obesity, without diabetes, without cancer.

Imagining a world unmarked by colonial violence is much more than a wishful exercise, broadening one’s capacity to envision more. Imagining this world free from colonial oppression is a radical beginning to something much larger.

My Ancestors, the Omamiwinini of the Algonquins of Pikwakangan, revered generosity and respectful inclusion in all aspects of life. Traditionally, many communities were measured by their esteemed hospitality; how welcome guests were made, how well a guest was fed, the beauty, craftsmanship, and care which adorned the gifts made for giveaway. The more a family gifted of its wealth and comforts to others, the higher it was elevated by the community and nation.

Imagining this old way of honouring each other in present society seems most at odds, though more and more people are yearning to return to simpler times, as society’s problems grow in complexity. The radicalness lies in shifting our sights from commercial success to communal success. Patience is the element of creating safe spaces for community to form and begin unlearning.

Had colonization been directed to colonising Settlers, a barter system could have been the economic heart of Canadian society, rather than capitalism.

This National Indigenous Peoples Day, I remember my ancestors and think about how they lived their lives on this land. I pray that Canadians will continue to learn about how Indigenous people respect Turtle Island, and that we all continue to work together, no matter what the day’s government might say.

Chrystal Désilets is KAIROS’ new Indigenous Rights Program Coordinator.  She is an Algonquin Storyteller and Traditional Counsellor from the Pikwakangan First Nation. Chrystal is also known as a founder of Aunties on the Road, Wananoshka Mashkiki.