Seeds of Truth: Reflections on the KAIROS Blanket Exercise and Youth Exchange with Guatemala 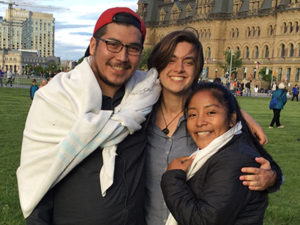 Emilio, Hannah and Lilian on Parliament Hill after the Kitchi Blanket Exercise on June 2, 2017

Emilio, Hannah and Lilian on Parliament Hill after the Kitchi Blanket Exercise on June 2, 2017

I’ve only had the opportunity to experience the KAIROS Blanket Exercise (KBE) once prior to the one I participated in leading up to the Kitchi Blanket Exercise on Parliament Hill on June 2. When I first tried the KBE, it wasn’t so hard on me. It was conducted in French. Maybe I just couldn’t fully connect because it was in my third language and was about a lot of things that I was already aware of. But, experiencing it again in Ottawa, the morning before the Kitchi Blanket Exercise, was different. My emotions were triggered, my heart was heavy and my spirit was fragile. Seeing the group of mostly elderly people experiencing the Blanket Exercise and learning about the history for the first time, made me realize how many people do not know the true history of their country and the First Peoples of this land. Seeing emotions run deep in the participants, made it hard for me to hold back my own tears.

It made me think of my Grandparents, who were pretty well the same generation as the participants, what they had to endure and what their parents and Grandparents had to endure. I was reminded of the stories they told me that I will never forget about the blankets infected with sickness’ that were given to our people when we asked for peace; about how they had confrontations with RCMP trying to protect themselves and their children; about how as children they were beaten and abused when they were taken so far away from home. I thought of the stories they told me about how the Indian agents changed our names because they couldn’t, or didn’t want to spell them or allow us to keep our names, and about how the Indian agent told my Grandmother that she would never succeed or amount to anything because she was just another Indian. I was reminded of the stories about how they took away the children to kill the Indian and save the man, while they took our men overseas to fight for “freedom” using Indigenous war tactics and languages as code talk to defeat the Axis powers, the same language and warrior culture they sought to eliminate. These Indigenous soldiers came back home to Canada only to have their land taken from them and given to settlers. I was reminded of how we had to fight for a country that didn’t consider us citizens and of how we were treated as less than human.

The emotions ran deep throughout the workshops and exercises at the KAIROS Blanket Exercise gathering in Ottawa. Although this triggered me and many others because of the numerous negative aspects of colonization that we still experience in our lives as Indigenous peoples today, seeing the Kitchi Blanket Exercise on Parliament Hill was a really special occasion. I saw many Canadians of different skin colors and backgrounds come together to stand in solidarity and to learn more about the true history of Canada. The exercise is so crucial at this time for our country, because we keep speaking of reconciliation, and the KBE sheds light on a lot of the truths that have been unspoken for far too long.

Meeting with our Guatemalan friends for the the KAIROS Blanket Exercise exchange has been such a blessing and an honour, because it has enabled us to connect and share stories about the realities we face in two different parts of the world. There is so much that can be done with the KBE in Latin America because it is so relevant in every corner of the world where colonization has been experienced. It is truly beautiful when people come together, both Indigenous and non Indigenous and build bridges over gaps that have separated the people for far too long. The KBE can really help open the door to rewriting the history text books, as well as open the minds of the average person who has never learned about the history of colonization in Canada and in Guatemala. The wounds from history are still fresh for the Indigenous people of Canada and the world. The only way to move forward is to acknowledge and learn from the past. To make a better future, we must work at it today, together, with open minds and respect.

For more information on the program.

Emilio Wawatie is an Algonquin Anishnabe from Barrier Lake, Quebec. He is an activist, musician and a filmmaker and has been working in the arts on a national and international level for 5 years. He will be pursuing a degree in music at University in the fall.