Reading the Bible with ecological eyes 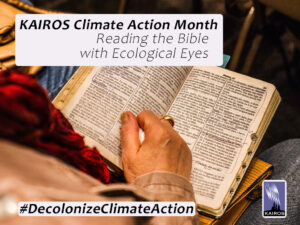 The Season of Creation asks us to listen to the voice of creation.  Decolonizing climate action begins with (but does not stop at) listening to the many voices that are muted around climate change and the ethics of earth-keeping.

We see everything through the lenses of our own culture unless we actively seek different ways of understanding. We read Scripture in this way too. For example, Western culture, and especially the modern Western world, puts a human-centred (anthropocentric) stamp on everything. What we call “Western culture” is a result of the myriad influences of industrialization, imperialism, Christendom, rationalism and more. Among other characteristics, to read the Bible with “ecological eyes” is to consider, “How would I read this if I was thinking about Nature/all of creation, about interrelationships of humans and land and other created things?”

For one example, look at one of the most well-known passages of Christian Scripture: John 3:16-17.

For God so loved the world that he gave his only Son, so that everyone who believes in him may not perish but may have eternal life.

Indeed, God did not send the Son into the world to condemn the world, but in order that the world might be saved through him. (John 3:16-17)

In Greek, this word translated as “world” is “COSMOS.” Re-read the passage and substitute “cosmos” for “world.” Does it reframe the way you perceive things? That the incarnation of Jesus, and everything about ‘salvation,’ is not just for humans but for the entirety of Creation?

Other examples abound! Throughout both Hebrew and Christian scriptures, it is clear that the Creator loves and cares for the entirety of creation. Numerous passages even display an underlying assumption that other creatures believe and have a relationship with the Creator.

But too often the human-centred reading dominates – to the degradation of creation and injustice for the global human community. As Pope Francis wrote in his important teaching letter Laudato Si, “…the Judaeo-Christian thinking…that grants man [sic] ‘dominion’ over the earth has encouraged the unbridled exploitation of nature…(and) is not a correct interpretation of the Bible…” (Laudato Si’, #67) Francis calls for an ecological conversion.

Decolonizing the Christian faith and decolonizing climate action both require rethinking fundamental assumptions and unmuting voices that have been excluded from the halls of power. Alison Cox, one of the Indigenous delegates on the KAIROS For Love of Creation delegation, calls on all of us – Christians, non-Christians people of all faiths – to change our mindset, and decolonize our relationship with nature and Mother Earth:

“So we are not just advocating for ourselves, we are advocating for Mother Earth. If we can start channeling that mind set for those things that we don’t see as living but are interconnected to us and to our world as much as our blood and our bones and everything that we need to live.”

She challenges us to become the caretakers of the land for the next 10,000 years:

“And because we are few now, our Indigenous peoples are few, it is up to you, Canadian society, to take on that role and responsibility. It is now your turn to make sure that life on Earth continues for the next 500, 2000, 5000, 10,000 years, as we the original caretakers have taken care of the land.”