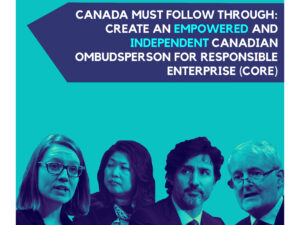 The Government of Canada has concealed from the public a report outlining how it can grant the Canadian Ombudsperson for Responsible Business Enterprise (CORE) the autonomy and powers to investigate allegations of human rights abuses at the overseas operations of Canada-based companies. Global News reported on the McIsaac Report today, which was commissioned in 2018 by the federal government. The McIsaac Report declares that the Canadian government has the jurisdiction to empower the CORE through the Inquiries Act or stand-alone legislation. Furthermore, the report states that without independence and investigative powers, including powers to compel documents and testimony, the CORE’s effectiveness may be compromised.

Instead of heeding its own report, the federal government has forsaken expert legal advice, affected communities and workers, and the thousands of Canadians, including the KAIROS and member churches networks, who for over fifteen years have been demanding that companies be held accountable for human rights and environmental violations.

“By ignoring and hiding its own expert advice, the federal government is showing it is more interested in appeasing the demands of the mining industry than upholding its human rights obligations or making good on its promises,” says Emily Dwyer, Coordinator of the Canadian Network on Corporate Accountability (CNCA), of which KAIROS is a member. “The Government of Canada has turned its back on the communities and workers harmed by Canadian companies overseas.”

Today’s news comes just as the CORE intends to begin taking complaints and months after the Minister of Small Business, Export Development, and International Trade disclosed that the federal government would not be empowering the office.

KAIROS holds that without the tools to investigate, the CORE’s mandate is futile. Therefore, KAIROS continues to urge the Government of Canada to empower the CORE.

KAIROS’ latest statement on the CORE, which includes a letter to Minister Ng, emphasizes the need for stronger corporate accountability measures, especially in the context of Canada’s stated intent to formalize its feminist foreign policy. The letter reads, “KAIROS upholds that without strong and unequivocal corporate accountability measures that respond to the gendered impacts of resource extraction, Canada’s foreign policy will fall short of its feminist intentions.”

In addition, KAIROS recommends that, until and unless the CORE is empowered, affected communities and their representatives consult the CNCA’s Approach with Caution document before making a decision on whether and how to engage with the CORE.

KAIROS continues to be disappointed by the Government of Canada as it consistently sides with corporate interests over corporate accountability, to the detriment of human rights and the environment.

KAIROS network has been calling on the Canadian government for corporate accountability and an empowered CORE for years now. Despite this disappointing news and in light of this report, we ask you to continue to take action.

Join KAIROS and CNCA members in urging the Government of Canada to empower the CORE and enact mandatory human rights due diligence legislation:

Tweet, write, or phone your local MP to ensure politicians from all parties recognize that Canadians demand an Ombudsperson “with teeth” and mandatory human rights due diligence legislation!

Visit the CNCA’s website for more information on how to contact your MP and other federal government officials.

For more information on the CORE and corporate accountability, please visit MERE Hub, KAIROS’ digital hub on the gendered impacts of resource extraction.