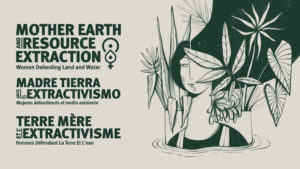 (Toronto, ON) – KAIROS Canada is thrilled to launch an online hub to connect and help further empower women land and water defenders in Canada and worldwide. Called Mother Earth and Resource Extraction– or MERE Hub, the resource was developed in consultation with women at the forefront of environmental protection.

MERE Hub compiles a range of original and existing material to support research, advocacy, information sharing, and movement building around resource extraction and its gendered impacts. It is in response to the alarming rise in reported criminalization, harassment and violence against land defenders by law enforcement and private security personnel and others linked to the extractive sector,  often the subsidiaries of Canadian companies. More than half of the world’s mining companies are headquartered in Canada.

KAIROS is launching the MERE Hub during the 16 Days of Activism against Gender-Based Violence campaign, which begins November 25, the International Day for the Elimination of Violence Against Women, and ends on December 10, International Human Rights Day.

To mark the  launch, KAIROS will host a public panel  on November 27 at Ryerson University featuring Natalia Atz Sunuc of the Guatemalan association Kaji’ Ajpop and Isabel Zuleta, with Movimiento Ríos Vivos Antioquia in Colombia, and moderated by Magdalena Ugarte, Assistant Professor at Ryerson University’s School of Urban and Regional Planning. The first phase of MERE Hub will focus on Latin America. The second phase, to be launched in the spring of 2020, will focus on Canada.

“Across the globe, Indigenous and Afro-descendant women are on the forefront in the defense of the environment,” says Gabriela Jiménez, KAIROS Latin America Partnerships Coordinator. “Through knowledge and life experience, they are too aware of the dangers that extractive projects can pose on all forms of bodies–physical, geological, water. MERE Hub provides women land and water defenders information and resources to support their efforts in advocating for the holistic consideration of the social, economic, health, and environmental impacts of proposed and extant projects before decisions that have long-term ramifications are made.”

Published on Scalar, an open source publishing software, MERE Hub includes original content and a compilation of resources requested by women land defenders through an online survey circulated worldwide during the summer of 2019. The logo and illustrations are by La Suerte (Sofía Acosta), a visual artist from Quito, Ecuador.

Resources include maps of concessions and existing projects, guides and reports on the rights of human rights defenders, links to organizational capacity building resources, a list of organizations working on issues concerning resource extraction, practical guides on monitoring projects, and videos.

MERE Hub is one component of a SSHRC Partnership Engage Grant awarded to KAIROS and Dr. Sherry Pictou, Assistant Professor of Women’s Studies at Mount Saint Vincent University. Dr. Pictou is a Mi’kmaw woman from L’sɨtkuk (water cuts through high rocks), known as Bear River First Nation, Nova Scotia. She is an inaugural fellow at Yellowhead Institute at Ryerson University. The project is also funded by the United Steelworkers Humanity Fund.

Since 2014, KAIROS has produced reports and videos on the gendered impacts of resource extraction, working in partnership with women land and human rights defenders and Indigenous women’s organizations. These partnerships have informed KAIROS’ work on the intersection of gender justice, ecological justice, and Indigenous rights. To learn more, visit Women of Courage: Gendered Impacts of Resource Extraction.

KAIROS is a social justice organization that includes ten Canadian churches and religious organizations. We are Indigenous, settlers and newcomers in Canada working with people of faith or conscience all over the world for ecological justice and human rights. We deliberate on issues of common concern, advocate for social change and join with people of faith and goodwill in action for social transformation. Learn more: www.kairoscanada.org.