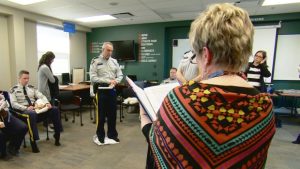 ‘It’s going to help me to be more attentive to what the Native people have gone through.‘

RCMP Staff Sgt. Lauren Weare tries in vain to refuse the blanket that a man has just put in her arms, with good reason. The fabric is infected with smallpox, and Weare must leave the exercise.

“You represent the many Aboriginal people who died of smallpox after touching these blankets,” says “the European,” a role played by one of the facilitators at a workshop for RCMP in southern Alberta.

The scene takes place on the first floor of the fire station in Cochrane, just west of Calgary. On this day, about 20 RCMP employees participate in the KAIROS Blanket Exercise — two hours of role-playing and discussion aimed at building better relationships between the RCMP and the Indigenous communities they police by learning more about Aboriginal history and rights.

Only a few minutes earlier, the entire floor of the room was covered with blankets representing the territory of the Indigenous Peoples before the arrival of the Europeans.

Then the blankets were folded again and again to symbolize the loss of territory, with participants falling one by one — deprived of food, killed in conflicts or smallpox epidemics, moved from one reserve to another or to residential schools.

Participants are almost all in uniform. They read the testimonies of Aboriginal people in turn: “My grandmother told me that we could not speak our language or be beaten,” reads a policeman. Some stories filled with courage are applauded.

Then they form a circle for discussion led by elder Roy Louis. 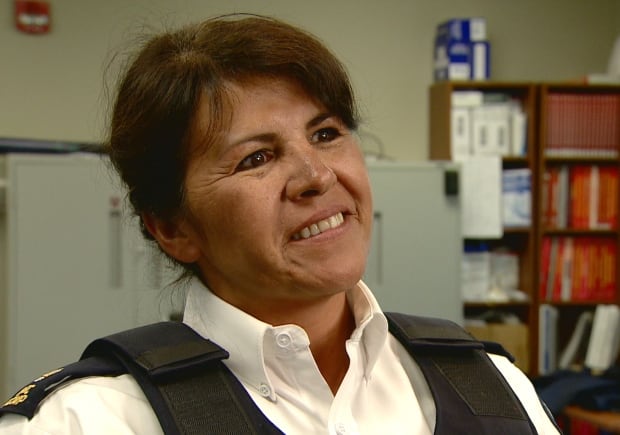 Cpl. Pascal Richard, who has worked in First Nations communities for several years, took part in the session.

“It’s going to help me to be more attentive to what the Native people have gone through and all the issues,” he said.

The KAIROS program was created two decades ago in response to the Report of the Royal Commission on Aboriginal Peoples.

The RCMP began using it a few months ago under the leadership of Insp. Honey Dwyer, head of the RCMP Aboriginal Policing Unit in Alberta.

She has organized four sessions and is preparing a fifth, for 120 first responders.

“They can have more empathy for what they’re doing in everyday policing,” said Dwyer.

She says it can benefit First Nations officers as well. 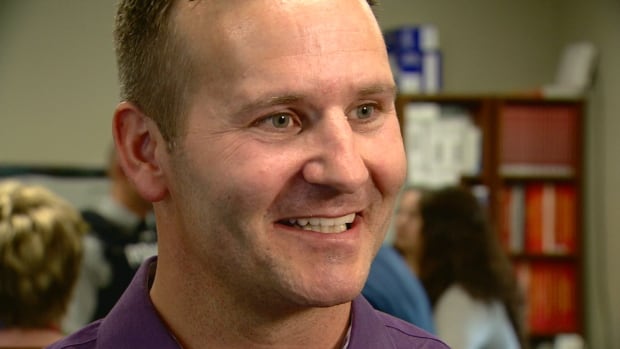 “We are, as Indigenous people, a part of the RCMP and we can make that change with the youth nowadays,” she said.

The program is one of four courses aimed at improving Aboriginal awareness in the province, the others being a two-day cultural camp, a four-day perceptions course and a four-hour online course.

“I think the difference here is definitely the interaction and being part of the process as opposed to being spoken to,” said Dwyer.

“Just to hear the different comments and experiences from each of the members and employees that have taken the training, I find it inspirational.” 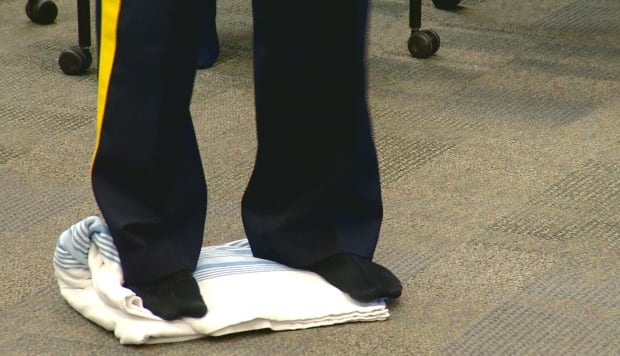 Part of the program sees officers stand on blankets symbolizing Indigenous territory in what is now Canada. Then the blankets are folded again and again to symbolize the loss of territory, with participants falling one by one — deprived of food, killed in conflicts or smallpox epidemics, moved from one reserve to another or to residential schools. (Laurent Pirot/CBC)

Originally posted on CBC News on May 15, 2017. With files from Dave Gilson and Laurent Pirot.