June 18: Stories of Courage: Women Defending Land and Water in Canada and Brazil 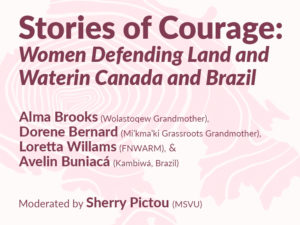 Join KAIROS’ MERE Hub on June 18h at 11:00am PDT / 2:00pm EDT/ 3:00pm ADT for Stories of Courage: Women Defending Land and Water in Canada and Brazil. This online teach-in is the last in a series of virtual events in June celebrating the launch of MERE Hub—the Canadian phase. The teach-in will feature:

Alma Brooks is a Wolastoqew Grandmother.

Simultaneous interpretation in English and Portuguese will be provided.

Mother Earth and Resource Extraction: Women Defending Land and Water (MERE Hub, for short) is a living digital hub developed for and in consultation with women land defenders in Canada and across the globe. Like the first phase, which focused on Latin America, the Canadian phase will highlight the current and historical role of women land defenders in protecting Mother Earth as well as include links to maps, campaigns, guides, toolkits, and other published documents for and on land and water protection.

If you have any issues with the registration link, please email gjimenez@kairoscanada.org.