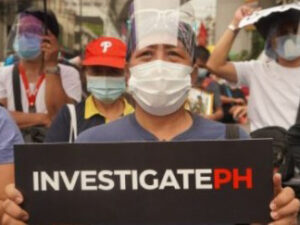 Yesterday, INVESTIGATE PH released its second report on human rights violations in the Philippines. The findings – which highlights escalating state-driven violence – are deeply alarming and demand urgent attention. The report is the second in a series of three by INVESTIGATE PH submitted to the UN Human Rights Council.

KAIROS, churches, civil society organizations and leaders from around the world are participating in this independent global initiative. The first report, released on March 16, warned of intensified political repression in the Philippines since last summer, fueled by the Anti-Terrorism Act enacted last July, and the brutal implementation of a National Task Force to End Local Communist Armed Conflict. The third and final report will be released in September.

The second report spotlights three aspects of state terror in the Philippines: a War on Poor People in the guise of antidrug operations, a War on Dissent, and a War on the Indigenous Moro People.

Hundreds of thousands of people have been displaced, imprisoned, terrorized or killed. With a prevailing lack of effective domestic remedies for these abuses, state mechanisms that facilitate human rights violations and ongoing impunity, the world is called upon to act in support of civilians and human rights and land defenders in the Philippines.

The report was released less than a month after the International Criminal Court (ICC) opened an investigation into crimes of humanity against the Armed Forces of the Philippines.

We ask that you take time to read the report.

Canada provides support and cooperation to the Philippine military and police. It also holds strong economic and social – thereby diplomatic – ties to the country. But, the time for quiet diplomacy is over.

We will soon provide you with information and tools to urge Canada to hold the Philippines government to account for its human rights violations, by acting on the recommendations in the Investigate PH report, including ending all support to the Philippines’ military and police.

We will be in touch soon.