EventsFaithful Disobedience: a witness to the climate crisis 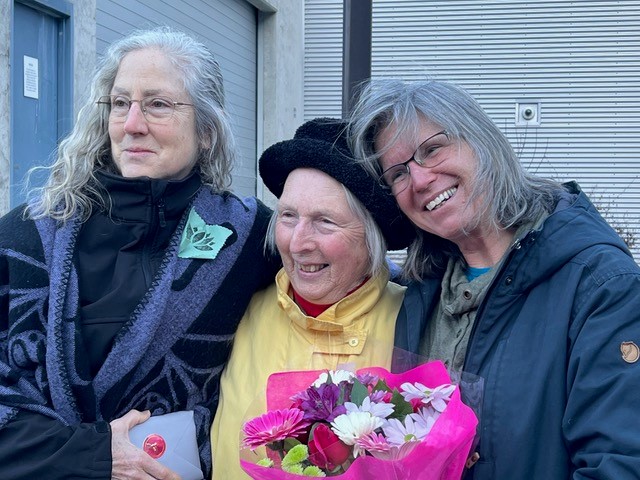 “Alouette Sisters” Ruth Walmsley, Catherine Hembling, and Janette McIntosh will share their experience of engaging in spiritually rooted non-violent civil disobedience. The three were arrested in the Fall of 2021 for acting to stop the Trans Mountain Pipeline Expansion and served 9 days together at the Alouette Correctional Centre for Women in Maple Ridge, British Columbia. KAIROS called on you to Support the Brunette River 6 and their action for a livable climate. Now you have an opportunity to hear from three of the six dedicated land and tree protectors. Bring your questions and consider your own witness in response to the ongoing climate crisis.
.
Ruth Walmsley (61), Catherine Hembling (80) and Janette McIntosh (58) took a stand for climate justice in September 2021 and were arrested while part of a multi-faith prayer circle, associated with Protect the Planet Stop TMX. All three served 9 days at the correctional centre from Feb.14-22, 2022. They stand on the shoulders of the 240+ bold Indigenous & settler land and water defenders who have been arrested since 2018 for opposing the Trans Mountain Pipeline Expansion (TMX) and to prevent catastrophic climate change.
.
The TMX is a new pipeline being constructed to transport oil from the Alberta tar sands to a marine terminal in Burnaby, just kilometres from where the three live. From there, toxic diluted bitumen would be loaded onto tankers and shipped to refineries overseas, at great risk to marine ecosystems while on route. Janette speaks for the group when she says, “We know that building new fossil fuel infrastructure, such as TMX, will contribute to global warming and the worsening of the climate crisis. This knowledge of what is at stake is part of what empowers and motivates us to stand up and do what we can to make a difference.”
.
Register to receive the Zoom link: https://secure.kairoscanada.org/civicrm/event/register?id=300
+ Google Calendar+ iCal Export