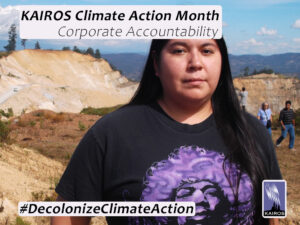 Two private member bills have been tabled at the federal Parliament that together would improve corporate accountability of Canadian companies operating internationally, especially in the resource extraction sector.

For nearly two decades civil society, labour unions, and religious groups—including KAIROS and its member churches and network members— have called on the government to take action on reports of systemic human rights abuses and environmental damages linked to Canadian oil, gas and mining projects around the globe. Global partners have repeatedly reported on harms caused by extractive companies linked to Canada and called on KAIROS to take action.   In particular, women environmental human rights defenders— on the forefront of land and water protection—are routinely harassed, targeted, attacked, and even murdered for their efforts. These abuses are committed under the watch of resource extraction companies – more than half of which are headquartered in Canada.

For these reasons, KAIROS has long been part of the Canadian Network on Corporate Accountability, and has urged corporate accountability oversight since its inception,  more than 20 years ago. Watchdog organizations repeatedly document troubling incidents of violence associated with mining companies. And mining companies repeatedly threaten and sue other countries for environmental and human rights statutes that affect their profitability. For these reasons, effective Canadian federal laws are needed.

Bill C-262 enacts mandatory human rights and environmental due diligence legislation (mHREDD) for Canadian companies operating abroad. The CNCA explains the importance of such a requirement on its website. In addition, the bill provides affected communities with easier access to pursue Canadian-based companies in Canadian courts. Many organizations, church leaders and Global partners support  Bill C-262, including the Bishops of Peru.

Bill C-263: An Act to establish the Office of the Commissioner for Responsible Business Conduct Abroad and to make consequential amendments to other Acts

Bill C-263 would grant investigatory powers to the existing Canadian Ombudsperson for Responsible Enterprise (CORE). Bill C-263 would improve CORE, adding powers that were promised during the campaigns to establish it, including the investigatory powers. In its current form, the Ombudsperson’s mandate is limited to mediation services to Canada-based companies and communities—and only after an allegation passes the CORE’s requirements of credibility.

Through its power and practices, the resource extraction sector has been particularly detrimental to human rights and the environment. The sector has been significant in the industrialization that has produced the climate crisis. It is also crucial to many of the technological emissions-reduction solutions – such as rare earth metals for electric vehicles.

Colonialism has morphed into new forms, such as “economic colonialism.” This indirect form of “new empire building in the 21st century” has been defined as “the practice of using capitalism, globalization, and cultural forces to control a country in lieu of direct military or political control whereby neocolonialism is motivated solely by economics.”

No entity, whether government or corporation should decide which communities become sacrifice zones. To decolonize climate action means to hold Canadian mining companies accountable. Bills C-262 and C-263 are a start – along with Bill C-226 to address environmental racism.

Collective letter-writing with other KAIROS supporters will occur Thursday, September 8. You can register for either of two times: at noon or 8:00 p.m. Register here.