COP23 and the Just Transition to a Clean Energy Economy 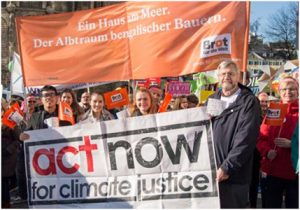 The twenty-third session of the Conference of the Parties (COP23) and UN Climate Change Conference was held in Bonn, Germany from November 6 to November 17. The talks focused on how to maintain momentum from the Paris Agreement and how to report on and monitor what States are doing. In the end, the 2018 Talanoa Dialogue was chosen as the approach for assessing how the actions taken by States are contributing to the goals of the Agreement.

This year also marks the twentieth anniversary of the Kyoto Protocol, the international emissions reduction treaty. In 2012, the Doha Amendment extended the treaty to cover the pre-2020 period, which is considered critical in meeting the goals of the Paris Agreement. But the Doha Amendment has yet to be entered into force and to do so will require ratification from 144 of the 192 parties to the Kyoto Protocol. To date, only 88 parties have ratified the Doha Amendment and COP23 was also an opportunity to get the remaining States on board.

The question of financing and delivery of previous funding promises were of key concern to vulnerable nations already experiencing the impacts of climate change. The People’s Climate Summit, held in Bonn leading up to COP23, brought attention to this and other climate justice issues, called out big polluters, and demanded that they be held accountable for climate loss and damage. Representatives of civil society organizations, faith-based groups, Indigenous communities, and others gathered in Bonn to demand commitments from governments to end fossil fuels subsidies and development, and to invest in a just transition to a clean energy economy.

Despite its geographic location, this year’s conference was hosted by Fiji with Fiji Prime Minister Frank Bainimarama serving as COP23 President.  The Fiji presidency brought attention to the challenges faced by Pacific Island states, which are highly vulnerable to climate change impacts.  There is an urgent need to address vulnerability by increasing resilience and prioritising funding for climate adaptation.

In a timely Spirited Reflection, Rev. François Pihaatae, General Secretary of the Pacific Conference of Churches, a KAIROS-funded partner based in Fiji, shared his thoughts on climate inaction and its devastating impact on Pacific nations.  “This year, with Fiji as the President of COP23, the Pacific region will show the world what true climate leadership is.  They will highlight for the world what climate change in the Pacific looks like and how inaction on climate change exacerbates that threat.”

To commit to do more within their own faith communities, a group of faith-based organizations and leaders in Fiji came together, with support from the COP23 Presidency Secretariat, to produce the COP23 Multi-Faith Charter.  KAIROS Canada has officially endorsed this Charter, which urgently asks States to take bold action to rapidly reduce emissions to limit warming to below 1.5°C relative to pre-industrial levels, in line with the Paris agreement.  The Charter also asks the global community to support and sustainably finance ecosystem-based approaches to climate change adaptation, mitigation, and disaster risk reduction.

For Canada, taking bold action to reduce emissions means ending exploration and expansion of fossil fuel projects.  KAIROS Canada has joined hundreds of organizations and leaders around the world in signing the Lofoten Declaration.  This Declaration affirms it is the urgent responsibility and moral obligation of wealthy fossil fuel producers, like Canada, to take the lead in putting an end to fossil fuel development, especially subsidies, and to manage the decline of existing fossil fuel production.  The Declaration points to research showing “that the carbon embedded in existing fossil fuel production will take us far beyond safe climate limits. Thus, not only are new exploration and new production incompatible with limiting global warming to well below 2°C (and as close to 1.5°C as possible), but many existing projects will need to be phased-out faster than their natural decline.”

Approval of fossil fuel export projects such as Kinder Morgan’s Trans Mountain pipeline and TransCanada’s Keystone XL pipeline undermine this progress and Canada’s commitment to reduce emissions to 30% below 2005 levels by 2030. In addition, the latest incident on TransCanada’s original Keystone pipeline that saw 795,000 litres of crude oil leak into Marshall County in northeast South Dakota demonstrates the perilous nature of pipelines and the risks they pose to the water and the land.

Despite these decisions, Canada has made progress in other areas. Canada’s plan to phase out coal-fired electricity by 2030, along with other commitments under the Pan-Canadian Framework on Clean Growth and Climate Change (PCF) are steps in the right direction.  A notable announcement from COP23 was the Powering Past Coal Alliance, a global coalition launched by the UK and Canada, with 20 partners.  According to the Powering Past Coal Alliance Declaration, these global partners are “united in taking action to accelerate clean growth and climate protection through the rapid phase-out of traditional coal power.”  The Declaration highlights the need for a staggered phase-out that recognizes that not all countries can complete phase out at the same rate, and that there must be a just transition for affected workers and communities.  This announcement was a positive sign of global momentum for the transition to a clean energy economy.

The announcement came one day after Climate Action Network Canada (CAN-Canada) called on the federal government to address the concerns of workers and communities who will be affected by the transition to a clean energy economy by establishing a national task force for Just Transition.  A concept that grew out of the labour movement, Just Transition is a framework to ensure that the impacts on workers in affected industries and communities are minimized during the transition to a low carbon economy and that workers are involved in the decisions about their livelihoods.  CAN-Canada’s announcement at COP23 was made alongside other just transition advocates including Heather Milton Lightening of Indigenous Climate Action who said, “For us, just transition must be led by forward visionary thinking, based on principles, practices and processes that build economic and political power to shift from an extractive economy to a regenerative economy.” Learn more about Just Transition in the 2016 KAIROS Briefing Paper Just Transition to a Low Carbon Economy.

In the 2017 federal budget, the Canadian government made an $11.4 million commitment over four years to accelerate the replacement of coal-fired electricity generation.  In June 2017, the federal government announced the $2 billion Low Carbon Economy Fund, to support projects from provinces, territories, municipalities, Indigenous governments, businesses, and other organizations that provide innovative solutions to reduce greenhouse gas emissions and generate clean growth.  How the federal government will consider issues of just transition in these programs is not yet clear.  However, Catherine McKenna, Canada’s Minister of the Environment and Climate Change did signal at COP23 that the federal government will convene a task force on just transition to  ensure the concerns of workers and Indigenous communities are considered in this period of economic transition.

And, should the federal government need more inspiration or examples of what just transition already looks like in practice, they need look no further than KAIROS’ New Economy Trailblazers series.  Launched on Day 1 of COP23, this online space will showcase leading initiatives and champions for a clean energy economy.  The trailblazers in these stories exemplify possibility and show us that change is not only possible, it is already happening.