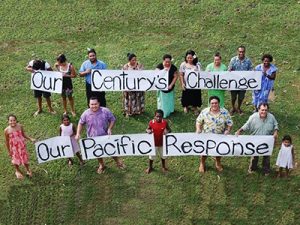 Social justice and the protection of the weak and the powerless are central in Jesus’ identity and mission.

Back in the ‘70s, 80s and 90s, ‘sustainable development’ was the ‘in thing’ and billions dollars were poured into it, with the focus over the rise in global poverty, hunger and famine.

So much so that the song “We are the World” was produced and aired worldwide in the mid 1980s to support the drive to ‘feed the hunger’ and reduce poverty.

Today people are still hungry, poverty has neither increased nor reduced, but deepened, and inequality has widened. The recent Oxfam Briefing Paper on global poverty and inequality and ironically the financial scandals in recent years attested to these trends.

Poverty is an on-going concern in the social context of the Pacific island countries, where the percentage of people living below the poverty line ranges from 31% of the population in Fiji, 30% in Samoa and 28% in Papua New Guinea, to 13% in Vanuatu. Numerous studies have been undertaken by various financial institutions, governmental aid agencies and NGOs, and a vast number of resources have been expended on research, strategies and projects to address poverty. While these are necessary for government policy on poverty and development, most of these measures basically serve to affirm the worsening poverty situation in the Pacific, and most of the remedies involve more and more development projects such as resource extraction (land mining and, lately, seabed mining), agriculture, housing, forestry and fisheries, along with income generation projects and small business schemes. Unless the fundamentals of development are critiqued and changed, the solutions may turn out to be problems themselves.

Climate change in the Pacific

Sustainable development is in fashion again. This time the context is climate change and its increasingly severe impacts on the global economy, the environment and social capital. I am rather sceptical but perhaps sustainable development used as the catch phrase to tackle the impacts of climate change may just work in light of the increasing severity of its impacts in our region, and their threat to human life and the planet. The main question to ask is:

How do we develop and live sustainably with ourselves and with the environment in a world that is severely threatened by climate change impacts?

In COP 21 in Paris last in 2015, the Pacific leaders have moved the talks of climate change forward by including two main points into the Paris agreement:

For more than two decades, negotiations have failed to deliver the action required to protect our homes and livelihoods from dangerous climate change. Communities everywhere are stepping up to ensure that their voices are heard, and that the leadership vacuum left by world leaders is filled and they deliver the change we need at the pace we need to avoid catastrophic climate change.

According to the UN, ‘this year’s UN Climate Change Conference kicked off in Bonn, Germany with strong, unified calls to hold to the path of the Paris Climate Change Agreement. With this year’s background of destructive hurricanes, fires, floods, droughts, melting ice and impacts on agriculture threatening food security, “All over the world, vast numbers of people are suffering – bewildered by the forces ranged against them. Our job as leaders is to respond to the suffering with all means available to us,” said newly elected COP23 President, Fijian Prime Minister Frank Bainimarama.

The purpose of the two-week meeting led by Fiji, known as the 23rd Conference of the Parties (COP23), is to negotiate and outline how to implement the Paris Agreement on climate change signed by nearly 200 countries.  – ­excerpt from The Independent

We simply cannot ignore the growing poverty among our people; the rich few and the many poor; the depletion of our Ocean and land resources; the social ills that are festering our societies in the Pacific such as violence against women and children, and the increasing isolation of our elderly people, to name a few. God bless.

Rev. Francois Pihaatae is an ordained minister of the Maohi Protestant Church and the General Secretary of the Pacific Conference of Churches, partner of KAIROS based in Fiji.