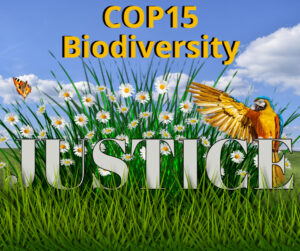 The Biodiversity COP 15 in Montreal with 10,000 delegates from around the world is coming to an end. The conference’s objective is to determine the post-2020 global biodiversity framework.

The astonishing collapse of the abundance and variety of living beings worldwide rivals climate change for the titles of crisis and emergency. However, the latest news had some delegates walking out. These delegates, primarily Indigenous peoples and representatives from the Global South, feel that they are not being heard at the negotiations.

KAIROS’ mandate is ecological justice and human rights.  Our ecology program takes a justice lens, stating explicitly that social justice, ecological sustainability, and Indigenous rights must be integrated. However, that environmental justice lens sometimes collides with other approaches to conservation and environmental protection.

The mainstream environmental movement began with efforts at conservation of wildlands and wildlife and a focus on the beauty of nature. It rarely considered human justice. These days, however, Indigenous peoples and allies worldwide are demanding an end to the displacement of Indigenous communities when their lands are designated nature reserves or national parks. Discussion on this conservation colonialism is coming to the fore because such problematic “solutions” are still occurring and being promoted. With this history, people might be forgiven in thinking that biological diversity initiatives are more of the same old wildlife and wildlands protection schemes, detached from justice. KAIROS, Indigenous peoples and faith-based groups have staunchly emphasized attention to ecological justice in the pursuit of protecting biodiversity.

Religious and spiritual traditions have much to contribute to the biodiversity convention. The Multi-Faith Response to the Post-2020 Global Biodiversity Framework begins with the web of life as a common foundation among faith traditions. This is consistent with the science of biodiversity which highlights the intricate connections among all aspects of ecosystems. For instance, salmon help trees grow: the fish, bears and trees are a nutrient loop in the Pacific temperate rainforest. Similarly, disturbances in the forest soil wreck the ability of trees to share nutrients even among different forest tree species. Trees do this nutrient sharing underground with the help of mycorrhizal networks. Nature is more complex than we know, with intricate webs of inter-connected strands.  Elimination of these critical strands is accelerating and there is no way of telling when system collapse will occur.

Simply put, biodiversity loss is the elimination of strands.

Human populations rely on nature – all our food, many of our medicines, and the “ecosystem services” of flood control, pollution dilution and cleansing through wetlands, air purification, natural carbon sequestration (far more effective than human technology), heat abatement, soil creation and so much more. Economists calculate these “services” are worth trillions (at least twice as much as human-based economic activity). This is especially true for communities that directly engage with their local environments.  And yet local communities rarely have control over biodiversity and land governance decisions are made remotely. That creates injustice.

Ecological justice begins with equitable participation in governance. Ecological justice includes recognition of the rights of local communities. For Indigenous peoples, it includes free, prior and informed consent, and acknowledgment of the value of Indigenous knowledge. Ecological justice perceives and is based on the connection to food systems that provide for all from nature’s bounty. It insists on an ethical approach to production and extraction, that is, not a crass and inequitable calculation of the political or economic benefits that disproportionately add to wealth for the global elite. Ecological justice lets the benefits of health and biodiverse ecosystems stay with the people.

Faith groups at COP15 are insisting that biodiversity conservation is founded upon a rights-based approach as well as a different relationship with all creatures of this world. Clifford Mushquash, a KAIROS delegate to COP27 on climate change, challenges all of us: “Can you come to understand yourselves as being part of the land like the Anishinaabe do? What would happen if we all could do this?”